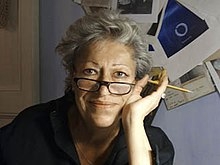 Sant Martí Vell, Spain—Elsa Peretti, the renowned jewelry designer who created many of Tiffany’s modern iconic pieces such as the bone cuff and the bean necklace, died March 18 at the age of 80. In addition to introducing a modern, organic aesthetic to the jewelry market, her designer-branded collection set the stage for the entire designer and branded jewelry movement to take hold in the broader jewelry industry, especially for high-end jewelers. Image: Wikipedia

Peretti, a former fashion model, was born to wealthy Italian parents and educated in Rome and Switzerland. She returned to Rome to study interior design, but when she decided to become a model in the mid-1960s, her parents cut her off financially and she had to forge her own path, which quickly led to America and New York City.

Her willowy, elegant form inspired many groundbreaking fashion designers of the era, including Halston, Issey Miyake and Charles James, and she was a regular at New York’s Studio 54 discotheque, the internationally famous hangout for the fashion, music, art, and jet-setting crowd.

But Peretti was more than a walking clothes hanger or socialite: she had real artistic talent. She began designing accessories and jewelry for a few of her designer friends while working as a model. Halston, the first designer signature fragrance, was packaged in an Elsa Peretti-designed bottle. Peretti received a Coty Award, the fashion industry’s top design honor, in 1971, and by 1972, had her own boutique in Bloomingdales, one of New York’s top department stores. 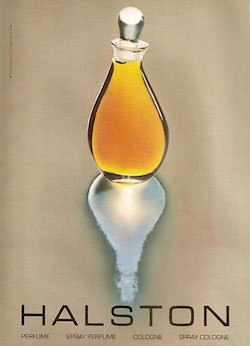 Peretti joined Tiffany & Co. in 1974 with a contract to design silver jewelry—something to attract a younger clientele—and within five years, she had become the jeweler’s leading designer. In total, Peretti created more than 30 collections for Tiffany & Co., and in 2015, Elsa Peretti jewelry accounted for about 8% of Tiffany net sales. The jeweler also has begun reissuing some of her vintage designs. 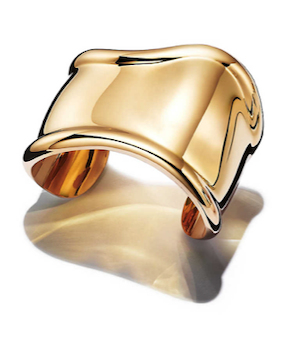 Many of her inventive designs—such as Diamonds By The Yard and the Open Heart necklace—laid the foundations for industry-wide adaptation. Her concept of spacing out diamonds or pearls on a chain was done as a means to keep prices down, while the idea of slipping a chain through an open heart-shape frame, as opposed to putting a heart on a bail, was in line with her organic, youthful aesthetic. To this day, any station necklace or open-frame necklace owes its origins at least in part to Peretti. 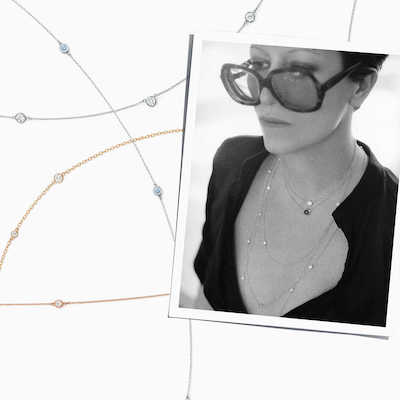 The designer with Diamonds By The Yard necklaces, above, and her open heart necklace, below. Images, Tiffany & Co. 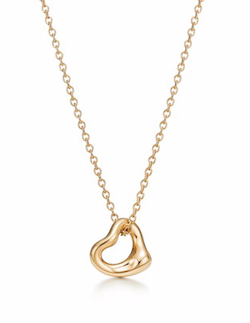 The arrival of Elsa Peretti at Tiffany & Co. in 1974 signaled a revolution in jewelry design. On the day her first collection debuted, it sold out and elevated sterling silver to luxury status overnight. A true pioneer of design, her unique creations had a never-before-seen organic aesthetic—bold and powerful, yet feminine and unpretentious. Among her acclaimed creations are her revolutionary Diamonds by the Yard®, a combination of fine, fluid chains and bezel-set stones that forever changed the role of diamonds in fashion.

A statement from the jeweler praised Peretti effusively. “A masterful artisan, Elsa was responsible for a revolution in the world of jewelry design. Her collections of organic, sensual forms have inspired generations. Elsa’s relationship with style and the natural world was profoundly personal and strongly reflected in her creations. Elsa explored nature with the acumen of a scientist and the vision of a sculptor.”

Next article:
Understanding How and Whether to Compare Your Conversion Rates to the Average 2-3%