A Big Month For Bankruptcies: Gump’s, Samuels Both In Chapter 11

San Francisco, CA—Two major retail names both announced filings for Chapter 11 bankruptcies this month and have begun to look for buyers and/or to liquidate.

Gump’s, one of San Francisco’s most iconic luxury retailers, filed for Chapter 11 bankruptcy on August 3. The department store—which sells everything from apparel to home décor to high-end designer jewelry and is especially famous for its pearls—was founded in 1861 during the great San Francisco Gold Rush, when newly minted millionaires flocked to the store to buy instant style and respectability through the old-world art, mirrors, and frames the Gump brothers brought back from their travels abroad. The late Nan Tillson Birmingham, retail historian and author of Store, wrote in a 1998 article that the store added jewelry when Mrs. Gump, who thought her husband was seeing a mistress on his buying trips to Europe, told him to take the jewelry she believed was a guilt offering down to the store and sell it.

The store that survived the 1906 San Francisco earthquake and the Great Depression unfortunately has not been nearly as successful at surviving the current seismic shifts in retailing. Although it found some success in both catalog and e-commerce—which came to account for more than three-fourths of its business—it proved not enough to overcome the challenges facing many old-time department stores. JCK reports that although the store still hopes to find a buyer, Gordon Brothers and Hilco have been retained to conduct liquidation sales, and its homepage is already touting a going-out-of-business sale.

Separately, the 120-store Samuels chain filed for Chapter 11 bankruptcy in Delaware on August 7, the latest casualty of the Nirav Modi scandal that brought down A. Jaffe and Firestar earlier this year. The Gitanjali Group acquired the retailer in 2006; Mehul Choksi, Gitanjali’s owner and CEO, is Nirav Modi’s uncle and neck-deep in the same scandal as his nephew.

When the Modi news broke, Samuels CEO Farhad Wadia initially had expressed optimism the 125-year-old chain could overcome the bad publicity surrounding its parent company, which Wadia described as an “arm’s length” relationship. Now that the firm is for sale, Wadia remains optimistic it will find a buyer. He told JCK most Samuels stores are profitable and gearing up for holiday, and that management has been in discussions with several interested parties. But National Jeweler reports the store has been struggling since the scandal broke, as Gitanjali, now defunct, was its main source of merchandise, and vendors have been reluctant to supply the retailer on consignment. 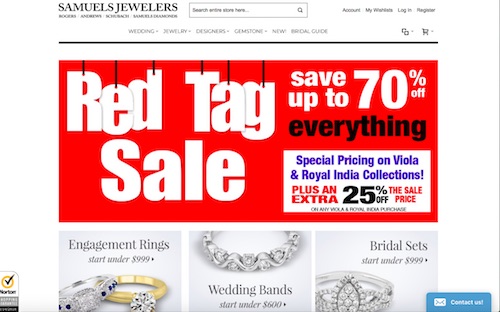 Samuels employs 690 people with stores in 23 states under five nameplates: Samuels Jewelers, Rogers Jewelers, Andrews Jewelers, Samuels Diamonds, and Schubach Jewelers. Its U.S. management team is not implicated in or suspected of any wrongdoing in either India or the United States.

All store associates will keep their jobs, although at press time it was not known if the chain’s name would change to Tourneau or even to Bucherer. Tourneau also has a presence in both the California and Hawaii markets, but like Bucherer—and unlike the watch-focused Tourneau—Baron & Leeds has a robust selection of diamonds and jewelry, including fashion brands such as Marco Bicego, Lisa Nik, and Mikimoto.

It also remains to be seen whether the Tourneau chain will at some point be rebranded to Bucherer.