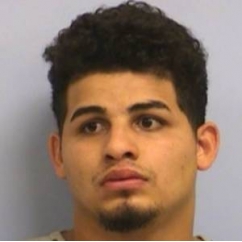 Austin, TX—The March 2 murder of AGS jeweler Theodore “Ted” Shaughnessy, owner of Gallerie Jewelers in Austin, TX, shocked and saddened both customers and industry colleagues. But both were further rocked to the core when Shaughnessy’s son, Nicolas, and daughter-in-law, Jaclyn Alexa Edison, were arrested last month and charged with murder for allegedly hiring a hitman to kill his parents. Corey Shaughnessy was unharmed in the attack that killed her husband.

Police say money was the motive. Between life insurance and the value of the business, young Shaughnessy stood to inherit $10 million from his parents’ deaths. 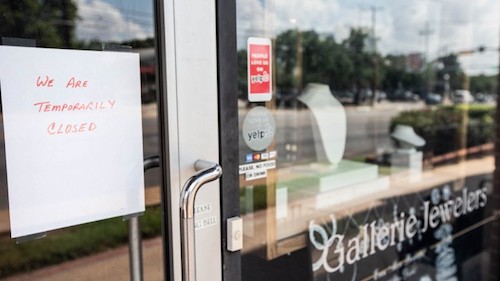 Gallerie Jewelers has been closed since the murder of Ted Shaughnessy. Shortly before his arrest, Nicolas Shaughnessy was talking with neighboring merchants about reopening the business, but it never happened. Image: Austin American-Statesman

Now a third suspect has been arrested in the case. Johnny Roman Leon III (top of page) of College Station, TX, was arrested last week and charged with criminal solicitation of capital murder, a first-degree felony. Both Nicolas Shaughnessy and Jaclyn Edison face the same charges. Shaughnessy Jr. remains in jail on a $3,000,000 bond; Edison, a student at Texas A&M University, had her $1,000,000 bond reduced to $250,000 and subsequently is out of jail on bond.

According to court documents, at least two days before Shaughnessy Sr. was killed, three men—including his son and Leon—were plotting his death. The pair may have approached a fourth suspect, as yet unnamed, offering him $10,000 to help kill Shaughnessy’s parents. That person was allegedly told "they needed two people to kill two people, by shooting them and possibly shooting some dogs," referring to Ted Shaughnessy’s beloved Rottweilers, who often visited the store to the delight of customers. One dog was killed during the attack. 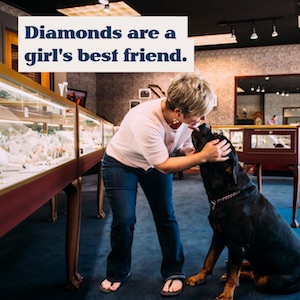 A. Jaffe To Be Sold To Paramount—Again

New York, NY—The on-off bid for Paramount to acquire A. Jaffe is back on. Or, at least it will be if the U.S. Bankruptcy Court in New York City approves the sale in an upcoming hearing on July 25. A. Jaffe, along with Firestar Diamond and Fantasy Inc. declared Chapter 11 bankruptcy in February following the scandals surrounding the companies’ owner, Nirav Modi.

Related: A. Jaffe Is Back On The Block Again

Paramount Jewels LLC, an affiliate of Paramount Gems and Parag Diamonds Inc., on Friday won its second bid for the brand and business of A. Jaffe, National Jeweler reports. This bid, for $5.2 million—$3 million less than its earlier original bid which ended when a judge halted the sale—includes the core assets of the company, such as the name, design patents, intellectual property, receivables, and so forth. The new bid, however, has been endorsed by the court-appointed Chapter 11 trustee, Richard Levin. Some non-core assets, mainly inventory, were already sold to other companies for a total of almost $1.3 million.

Parag Jain, manager of Paramount Gems/Parag Diamonds, told National Jeweler he has no plans to change or restructure anything at A. Jaffe and that it will be run as a separate division, retaining its current employees and chairman Sam Sandberg, with plans to invest in marketing initiatives to elevate the A. Jaffe brand.

Sales Down, Income Up For Canada’s Birks Group

Montréal, Canada—Birks Group released its financial results for fiscal 2018, reporting lower sales but an increase in net income for the year ending March 31, 2018.

The luxury jeweler’s net income more than doubled from fiscal 2017, from $4.9 milion to $11.7 million (Canadian), a figure largely attributable to the sale of its U.S. division, Mayors Jewelers, last year.

The 4% dip in comparable sales, however, may be at least partly driven by other major changes, reports Jewellery Business, a Canadian trade publication. Flagship locations in both Montréal and Toronto were renovated during the year, and the temporary closures of those stores drove total down. Absent those stores’ figures, total comp sales rose 1% instead of declining 4%.

A Bloomberg report says the new 17,000 square-foot facility was designed to allow all teams involved in the creation of new merchandise to collaborate together, eliminating the delays associated with job silos and departmental handoffs. Reed Krakoff, the wunderkind that revitalized moribund leather brand Coach heads all creative for the company, from jewelry design to store design, while Dana Naberezny, a veteran of David Yurman and Movado Group, runs the new design facility, which is filled with CAD, 3-D printing, and the latest technologies as well as old-fashioned benches and torches.

Naberezny is on the hunt for talented jewelers and designers. Bloomberg's article says 50 of 80 positions have been filled, mostly with Tiffany employees from other locations, but the firm has no compunctions about poaching talent from other luxury jewelry companies to fill the remaining slots. Jewelers applying for work will have to prove their skills before signing on the dotted line, says the Bloomberg report.

New York, NY—Jewelry artist, sculptor and visionary Alex Soldier, was honored with the Lifetime Achievement award at the 2018 UJA Federation Awards in New York City. The sold-out event recognized community leaders for their talents and philanthropic endeavors. Set in a spectacular ballroom at the St. Regis Hotel, overlooking Manhattan, the evening was hosted by actress, writer, and leading female entrepreneur Sonya Kreizman.

"This amazing artist doesn't need any introduction since he's well known around the world as one of the most innovative designers of our time" said Kreizman in her opening remarks about Soldier.

Recognized as self-taught and self-made innovator and inventor who revolutionized jewelry industry by introducing novel techniques and vision, Soldier said, "I would like to thank UJA Federation for this honor and recognition of my work. Thank you everyone for coming tonight to celebrate this special evening with me—an evening of art, beauty and philanthropy. Your remarkable support inspires me to create more beautiful pieces for you to wear and share with the world. Please enjoy this magical evening and always remember to give back and make our world a better place for everyone to be happy and free." 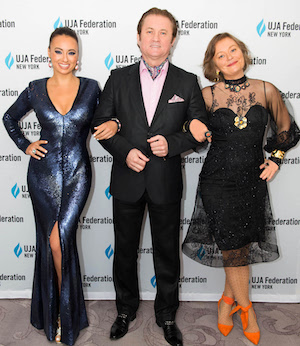 Above, left to right: Sonia Kreizman, Alex Soldier and his daughter, Maria. Below, Soldier celebrates with his wife, Galina. 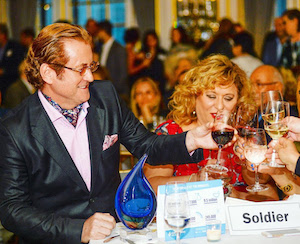