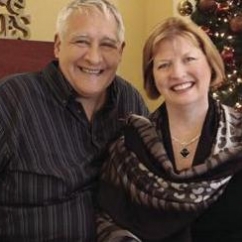 Merrick, NY—It’s no secret that one of the biggest issues facing the jewelry industry is its base of aging retailers. Indeed, the store closing statistics compiled by the Jewelers Board of Trade would be shocking otherwise—consistently more than 800 per year since before 2015—but fewer than 2% are bankruptcies. The remainder are voluntary endings of one form or another, whether a sale/merger/consolidation or just ceasing operations. New jewelry business are opening, but not fast enough to offset the number of independent retailers closing.

Recently, three more upscale jewelers decided it’s time to hang up the loupe and turn out the lights.

John and Jenny Caro, above left, owners of Jewelry By Designs in Woodbridge, VA, announced their decision November 11 and kicked off a going-out-of-business sale for their 30-year-old business. (Image: InsideNova.com)

The couple began with a 600-square-foot store in Lorton, VA, and moved to their current location in Woodbridge nine years later when space in a desirable shopping center became available. Since then, they’ve expanded five times to their current 4,000 square-foot space. The two have been active in both the jewelry industry—John is a Spectrum Award-winning designer and Jenny is popular speaker, a Jewelers of America board member, and chair of its political action committee—as well as in their own community, where they support organizations ranging from CASA to the local humane society.

“It’s bittersweet,” they told their local newspaper, but Caro hopes to remain active in the industry as a consultant and marketing the retailer software program John designed. In an interview with JCK, she acknowledged that she and John are tired of the constant need for reinvention necessary to stay successful, and it’s time to move on. There is an offer on the table for the business and they’re extremely hopeful it will go through, she told JCK. 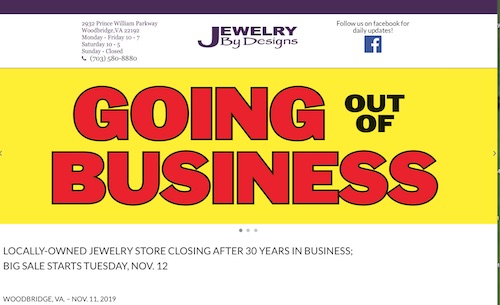 Jewelry By Designs' homepage is dedicated to its GOB sale.

Stan and Mary Sherwin, owners of K. Jons Diamonds And Gems, an AGS jeweler in Atascadero, CA, will close their doors for good after the holiday 2019 season. “Mary and I just absolutely love what we’re doing, Stan Sherwin told The Tribune SLO.“But we also love our free time.” 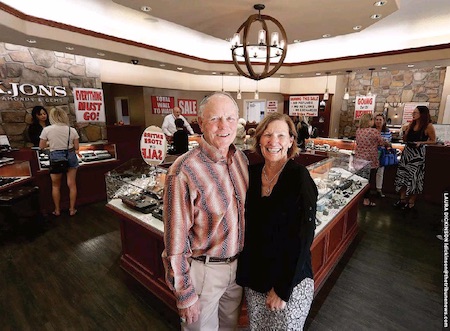 Stan and Mary Sherwin of K. Jons Diamonds and Gems. The store, above, is emblazoned with GOB sale banners, but the website, below, did not mention the jeweler's planned closing at all at press time. Image above: Laura Dickinson for The Tribune SLO. 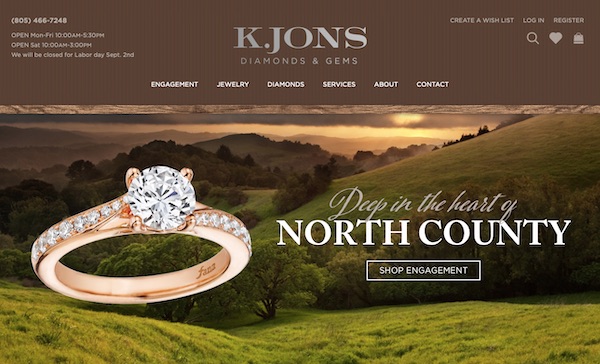 The couple began selling gemstones in the 1970s at the gem and mineral shows popular around California. Their 40-year-old store was named after Stan’s parents, Kay and John, and custom work has been an integral part of the business. The Sherwins opened the Atascadero store in 1980, and in 2004 built an entirely new, much larger store on the same property, tearing down the old building.

K. Jons is hosting a going-out-of-business sale, which ate will last through the holiday season and conclude in January 2020. Read more here.

And a Pennsylvania jeweler is calling it quits after 45 years in the industry. J. Dennis Petimezas, owner of Watchmaker’s Diamonds & Jewelry in Johnstown, PA, is closing at the end of the year.

Petimezas grew up in Little Rock, AR but landed in Pennsylvania with Gordon’s Jewelers before it was acquired by Zale Corp. In an interview with National Jeweler, Petimezas outlined his career, beginning as a porter for Gordon’s, then enrolling in the retailer’s manager trainee course and at GIA, rising up the ranks, and ultimately being transferred to Johnstown to open a new Gordon’s store there.

He left Gordon’s in 1975 but stayed in Johnstown. He went into business with the former owner of the Watchmakers Shop, but soon bought him out and expanded into jewelry. It’s never been easy, but Petimezas has stayed the course. Apart from the immediate Pittsburgh metro area, in the 1970s western Pennsylvania was—and in many places, still is—depressed; a challenge for anyone doing business in a luxury industry.

Like Jenny and John Caro, Petimezas took advantage of industry events and education to learn from peers, remain ahead of the curve, and adapt, change, and reinvent his business as often as needed to be the successful jeweler that stood out.

And exactly like John and Jenny Caro, he told National Jeweler that he just didn’t have another reinvention left in him. His “aha” moment came during a 2018 blizzard in New York City, when he and his wife, Dee Dee, were out in the city which was, for a rare moment, silent in the snowfall. He weighed the idea of another reinvention, more new technology, new concepts, and his age—69—against the backdrop of peaceful quiet enveloping the couple, and decided it was time. 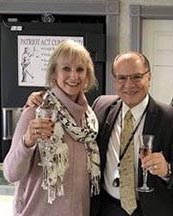 J. Dennis and Dee Dee Petimetzas, above. Below, the jeweler opted for a middle ground with advertising his closing sale: it's not the landing page but he slips it in among his other promotions. 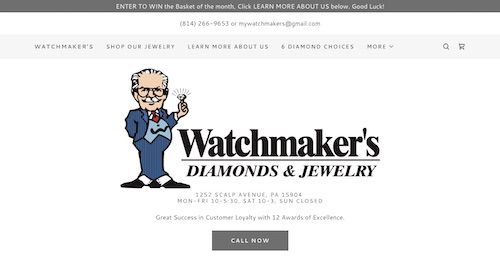 Someone has expressed interest in buying the business, as well as the building where the 3,000 square-foot store is located, he told NJ. Petimezas owns the shopping center.

Also like the Caros, he will stay involved in the industry on some level. He said what everyone in the business for any length of time knows: it’s in your blood.

Separately, Signet jewelers also closed 159 doors in 2019, and recall the Samuels Jewelers chain liquidated all 122 of its stores in February. Signet continues facing challenges on a multitude of fronts and, while the Choksi/Gitanjali fraud situation was the catalyst for Samuels’ closure, the retailer had multiple prior bankruptcies as it struggled to find its niche in a modern jewelry market.

Next article:
Editorial: Jewelry Is Key To The Fashion/Environment Discussion