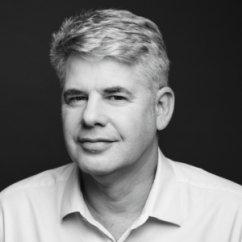 Merrick, NY—Here’s a question to ponder: How much does the average U.S. household spend on jewelry and watches per year? Does this spending differ by age group and, if so, by how much? Knowing how much different demographic groups spend can be very valuable to a business.

With all its recent trials and issues, the United States is by far the largest economy in the world. Individual states such as California and New York have bigger economies than some of the biggest countries in the world – and bigger than some super powers and OECD member countries. So, it is no surprise that the United States is the largest jewelry and watch consumer market.

Diamond Jewelry Is Losing Market Share in Its Most Important Market

In 2018, U.S. jewelry and watch sales totaled $82.5 billion. About half of this total is attributed to diamond jewelry sales. In 2018, there were 127.6 million households in the United States. A simple back-of-the-envelope calculation tells us that, on average, $647 was spent on jewelry and watches by each household. About $352 was spent per household on diamond jewelry, assuming a 4.5% growth in sales in the US in 2018. This growth in diamond jewelry sales in 2018 is a generous assumption, but it is good for our calculation. 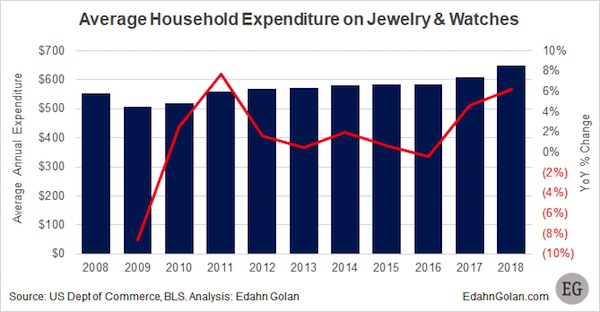 Related: The U.S. Jewelry Market Is Much Smaller Than You Think 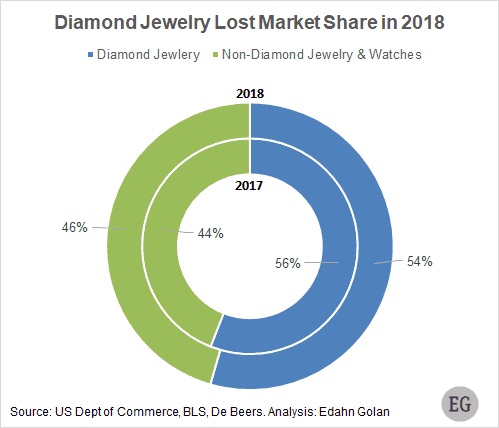 The overall figures are interesting as indicators of general consumer consumption. They do not, however, tell us which demographic group is buying more jewelry than others. An analysis based on the mid-year Consumer Expenditure Survey by the U.S. Bureau of Labor Statistics provides some insights.

The age group with the highest expenditure on jewelry and watches are 55-64 year olds. On average, they spent $1,231 per household during the second half of 2017 and the first half of 2018. 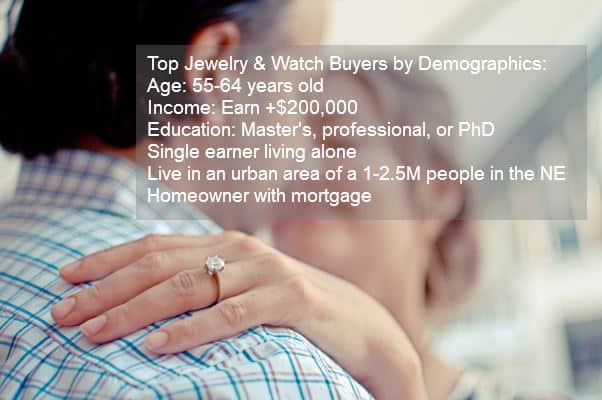 By income, those earning $200,000 or more had the biggest expenditure on jewelry and watches. They spent, on average, $1,657 per household, nearly triple the average. This is not very surprising. Neither is the finding that those with master’s and doctoral degrees had the highest expenditure when measured by education, $994. Higher income and higher education often go hand in hand.

Another finding is that singles living alone spent more than average, 2.6 times, to be exact. Going down the list, the households that spent the most are well educated, high earners and singles living alone. To complete the picture, they are also white, live in the Northeast, and own their homes, though most have a mortgage.

While it’s almost not surprising who the top spenders are, it is those who spend the least that offer some surprises. One surprise is that those that earn $30-40,000 a year spent the least, as measured by income. This is surprising because those who earn the least, $15,000 and less, spent near the national average of $615. 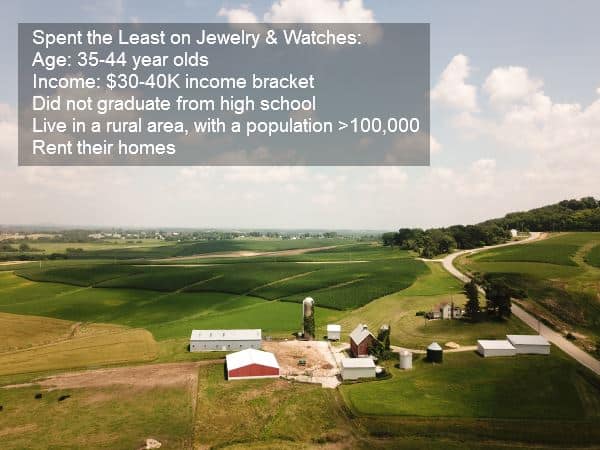 This is a recurring finding. Over the years, those in the lowest income bracket reported near or higher than average expenditure on jewelry and watches.

Less surprising is that 35-44 year-olds make up the age group who spent the least on jewelry and watches. They are usually married, and the large expenditure on a diamond engagement ring is already behind them. They are also at the height of their wealth accumulation, and are buying a house and raising kids.

Low Expenditure on Jewelry and Watches at Marriage Age

Since 1982, the average age at first marriage for men has been above 25. For women, this occurred in 1997. By 2018, men’s average age for first marriage reached 30 years old, and the average for women nearly 28. This is important to keep in mind when looking at the expenditure in the 25-34 age group. They spent, on average, $521 per household. Far less than expected, and this is the biggest surprise.

Younger adults spent about $900 on average, and 45-54 year olds spent more than $750 per household. This begs the question, did the survey get it right? Possibly.

We need to consider that those in the 25-34 age group are in deep debt with school loans, and prefer to spend on experiences over “objects.” Most jewelry expenditures in this age group could be for low-cost jewelry (and no watches), dragging down the average, even with a $3,500 diamond engagement ring.

To complete the demographic picture, the groups who spent the least on jewelry and watches include those who did not graduate from high school, and live in a large household in a sparsely populated rural area.

My biggest takeaway is the loss of market share. The diamond industry needs to wake up to this hard fact. Marketing needs to be far more effective and this is not limited to the large miners. Everyone needs to get behind this: jewelry makers, industry organizations, traders and diamond polishers. Another takeaway is that there are huge populations in well-defined demographics that spend far less than average on jewelry. This is a lost opportunity that can be addressed. After all, we all want to wear jewelry; it’s in our DNA.

Edahn Golan is an analyst advising financial institutions, global diamond firms, diamond industry organizations and governmental agencies on topics ranging from provenance of fancy color diamonds to diamonds' contribution to local economies. Among his clients are diamond firms, miners, and the world’s second largest retail metrics firm. As principal of Edahn Golan Diamond Research & Data, he has been quoted as an expert about the diamond sector and diamonds in The New York Times, the Wall Street Journal, and many other leading business and news publications. Click here to access his website, www.edahngolan.com

Previous article:
Strategic Merchandising And Open to Buy, Part One