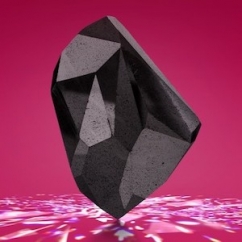 Such is the case of a 555.55-carat natural fancy black diamond called “The Enigma,” (image) which will go up for auction by itself next month as part of Sotheby’s RE(LUX) Luxury Sale Series. The stone has reports from both GIA and Gübelin, and the Guinness Book of World Records in 2006 listed it as the largest cut diamond in the world.

Sotheby’s Dubai office on Monday unveiled the diamond, gemologically classified as a carbonado diamond. According to Gems & Gemology, the scientific journal of GIA, carbonado diamonds are found only in Brazil and the Central African Republic, which billions of years ago were one land mass. These unusual diamond aggregates are unlike any conventional diamond and at least one theory of their origins suggests they came from space. From G&G:

Sotheby’s showed the stone to journalists as part of a tour including Dubai and Los Angeles before it is auctioned off in London starting February 3. Although the stone has no minimum, Sotheby’s estimates it will sell for at least five million British pounds ($6.8 million). The auction house plans to accept cryptocurrency for payment as well as traditional methods. Online bidding runs Feb. 3-9.

In addition to its 555.55-carat size, the stone has 55 facets as well. Its shape is based on the Hamsa (below), a Middle Eastern symbol depicting a hand, that stands for strength and protection and also represents the number five. 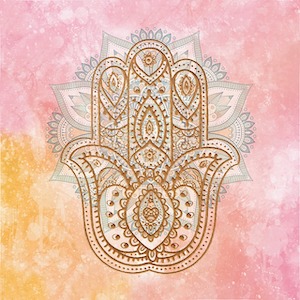 Next article:
Jeweler Nick Boulle To Race in 60th Rolex 24 Hours At Daytona, With Hardpoint