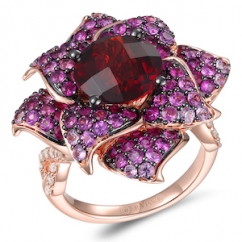 Great Neck, NY—As the ongoing COVID-19 pandemic has driven so many aspects of life into the virtual realm, a retail tech collaboration between celebrity jeweler Le Vian and Signet, its major retail partner of 22 years has helped both not only weather the effects but improve business through it. The jewelry brand also recently won one of Asia’s coveted JNA Awards for its retail technology innovations. Image: A Le Vian "Pomegranate" ring.

An early adopter of retail technology, Le Vian’s approach to digitization, in collaboration with Signet, is an industry-leading example into the next frontier of selling. One of the first examples was the Le Vian Style Bar, introduced in 2015. Initially it allowed customers to see thousands of Le Vian pieces via tablets, but in 2019 Le Vian added eight-foot electronic in-store totems to the program, allowing customers to choose from all of the brand’s pieces instantly while still in the store. Le Vian CEO Eddie Le Vian told The Centurion more than 250 of the totems are in use; about 200 in Kay stores, 50 in Jared stores, and a dozen or so in independent retail jewelry stores. Every banner using the totem gets its own specific content.

This year’s lockdowns sped up Le Vian and Signet’s omnichannel migration. A positive outcome is increased appointment show-up rates, from 50% a decade ago to nearly 100% today. As a result, private appointments—both virtual and in-store—and appointment-only trunk shows are now central to the Le Vian/Signet omnichannel model, resulting in buyers not only showing up but also purchasing in almost 100% of cases.

Le Vian and Signet’s live online virtual assistance was a big part of what won the company’s recent JNA Innovation Award. In July, Signet CEO Gina Drosos singled out the virtual events it hosted alongside Le Vian as a notable merchandising strategy for Signet, helping it become a more efficient and effective omnichannel retailer, while in a September conference call with investors and press, Signet CFO Joan Holstein Hilson named the brand a 'best performer' among the retailer’s merchandise mix.

During the pandemic, Signet introduced immediate phone assistance for website visitors and help via screen sharing. Consequently, Signet now closes online sales in 17% of cases, compared to 1% beforehand. The technology will be installed in 180 of Signet’s Ernest Jones and H.Samuel stores in the UK.

Other strategic moves the Le Vian brand made during the pandemic: 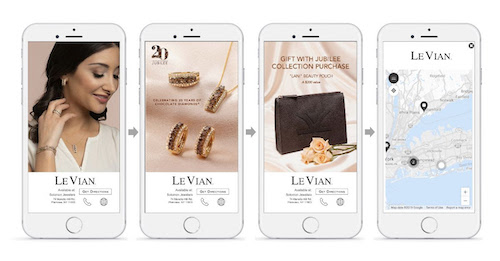 Next article:
Sethi Couture Featured on Cover of InStore