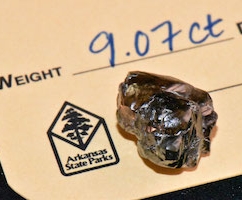 Murfreesboro, AR—A lucky visitor found a nine-carat diamond at Arkansas’ famed Crater Of Diamonds State Park on Labor Day. Kevin Kinard, 33, initially thought the brown stone was a piece of glass, but picked it up anyway along with any other crystals he found. Visitors are allowed to keep any stones they find digging at the park. Image: arkansasstateparks.com.

The 9.07-carat diamond is the second-largest ever to be found at the park, with the biggest being the 16.37-carat “Amarillo Starlight” found in 1975. That stone—estimated to be worth about $150,000—also is the largest diamond ever found in the United States. More recently, however, the 8.52-carat Esperanza Diamond was found in June 2015 by a woman visiting Crater of Diamonds State Park from Colorado. The former Stanley Jewelers Gemologist of North Little Rock, AR, handled the cutting and setting of the stone: Canadian cutter Evert Botha of Embee Diamonds traveled to the store to do a live cutting event, and the finished stone was set into an Erica Courtney-designed mounting. The event, also streamed live on video, garnered more than 1,700 views, lasting an average of 11 minutes each.

As is tradition to name large diamonds, Kinard is calling his stone will be called the “Kinard Friendship Diamond.” Kinard is shown here holding his diamond and a special certification from park officials (image, arkansasstateparks.com): 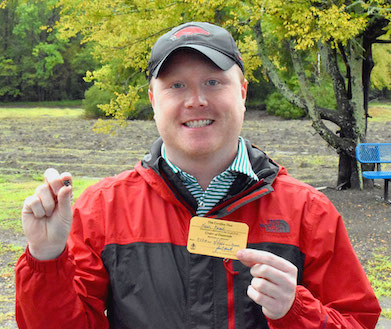 Crater of Diamonds attracted thousands of visitors per year prior to the COVID-19 pandemic; now the park is still open but has strict capacity limits.