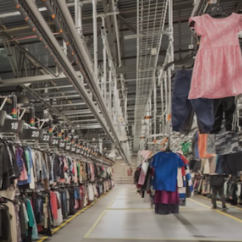 New York, NY—Retail might be stumbling in a number of sectors, but resale is rocketing. ThredUp, a leading fashion resale site, published its 2020 Resale Report in March, just as the pandemic lockdowns were sweeping the nation. (Image: ThredUp's vast warehouse has moving racks of secondhand clothing both coming in and going out.)

It may seem counterintuitive that a quarantine would drive sales of secondhand goods up, but that is in fact exactly what’s happening. Meanwhile, the rocketing price of gold at a time when many Americans are struggling with unemployment might drive consumers to sell off their jewelry—and give jewelers a chance to offer more affordable secondhand goods to consumers who might be more price-sensitive than they were a year ago.

The secondhand market itself is comprised of two main segments: resale, and traditional thrift and donation. Together, they accounted for $28 billion in sales in 2019, and estimates are that it will more than double to $64 billion by 2024, with resale leading the way.

In 2019, resale grew 49%. That’s 25 times faster than the 2% gain in the broader retail sector, says ThredUp’s study. And for apparel specifically—which is ThredUp’s focus—total retail clothing sales declined 4% year-on-year in 2019.

GlobalData, the retail analytics firm that partnered with ThredUp for the study, estimates a 39% compound annual growth rate, bringing the resale segment from $7 billion to $36 billion, whereas the more mature thrift/donation segment will experience a 6% CAGR, bringing it from $21 billion to $28 billion in that time.

Why is resale booming during quarantine?

Online thrifting is a bright spot in what has thus far been a broader COVID retail slump. Even though ThredUp’s weekly gross transaction values were down from mid-March to May vs. January through mid-March, they’re still up by 20% (vs 43% prior to lockdown). And while both offline secondhand and total retail are currently down 25% and 20%, respectively, online secondhand has risen more than 25% so far this year. 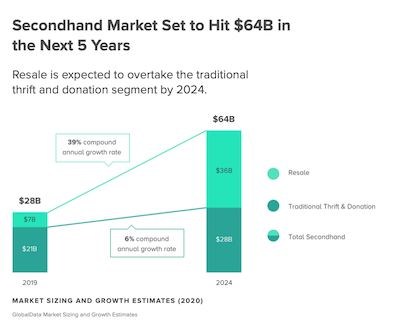 ThredUp's Resale Report shows how fast the resale segment is growing. Last year, it was a small fraction of the total secondhand market compared to traditional thrift and donation centers (bright green bar at left); by 2024 it is expected to comprise the majority of the secondhand market. Chart: ThredUp and GlobalData.

Part of the reason is what the study calls a "quarantine clean-out frenzy: 50% of people are cleaning out their closets more than they did prior to quarantine, leading to a 6.5-times increase in requests for Thred-Up’s Donation Clean-Out Kits. In May, shoppers spent a total 2.2 million hours browsing Thred-Up, a 31% increase."

ThredUp doesn't offer jewelry, even under its "accessories" tab, but other online resale sites do, most notably luxury online consignment site TheRealReal, which specializes in high-end designer brands and offers quite a lot of fine jewelry and luxury watches. Vestiaire, another luxury site, also sells jewelry, as does Poshmark, though its offerings also include costume jewelry. Then, too, many local brick-and-mortar consignment shops across the country also will sell fine jewelry, particularly if it's a name brand and therefore easy to establish a valuation.

Just as we saw consumers shifting to new habits in the wake of the Great Recession, McKinsey & Company predicts the next normal has started to emerge, and many of the behavior changes that consumers have begun to adopt will remain. Some findings:

Finally, vintage fashion scores points among younger generations as both sustainable and a way to express a unique style.