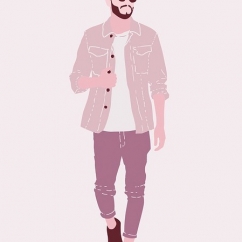 Merrick, NY—Raise your hand if you’ve ever made a sale to someone who looks like they could barely afford a hotdog, let alone a diamond.

Almost every jeweler can recall serving a customer whose clothes and hands are crusted with mud or grease, but easily buys his wife a $50,000 ring without batting an eye—and, conversely, dealing with a customer decked out head to toe in designer duds who bargains for a discount like it’s the Grand Bazaar. Image: LwcyD for Pixabay.

Once upon a time, a sartorial code signaled the wearer’s station in life. In the days when all men wore hats, upper-class men were called “high-hats” because laborers wore functional caps and had little use or money for a tall silk top hat.

In the latter half of the 20th century, most of those rules went away (especially hats and jeans) but there still were some unspoken sartorial clues that revealed who had money, especially old money. Understated clothing of exceptional quality that was possibly shabby from years of wear (old money being notably thrifty) was one. For instance, this article in Financial Advisor magazine, a British publication, suggests some wardrobe accoutrements that will put one at ease among high-net-worth individuals: Barbour wax jackets, Burberry trench coats, Hunter rain boots, a Montblanc pen, and more.

But the markers of wealth and class can be bought or learned, a common theme in both literature and movies. And since the advent of both democratized luxury and credit cards, it’s even easier to sport the trappings of wealth whether one comes from generations of money or is in debt up to the eyeballs. Need proof? Look no further than the Louis Vuitton and Gucci stores in the King of Prussia Mall in Pennsylvania, the largest shopping mall by retail space in the United States. Both stores have a roped-off waiting area and even on a Monday evening, the line to get in is at least 10 deep. It's a good bet their stores in every other mall or shopping district also have lines waiting.

So when anyone with a high enough credit limit can buy a Louis Vuitton bag or a big diamond, the truly affluent retreat into inconspicuous consumption. This isn’t a new trend—in the 2008-2009 recession people didn’t want to flaunt wealth in front of friends who lost their jobs—but it’s grown since then and now also encompasses environmental concern as well as social.

In today’s casual world, when people feel entirely comfortable wearing gym clothes anywhere, Target's parking lot is full of BMWs, a pair of intentionally-ripped jeans can cost hundreds of dollars, and the secondhand luxury market is booming, is there a way to know who can afford what?

One clue might be in their face. This article in The Week says rich people tend to be more relaxed and positive or happy looking—in part because money does alleviate at least certain life stresses. In an experiment at the University of Toronto, two doctoral students recruited 81 undergraduates to look at a series of photographs of men and women, cropped to uniform size and presented in grayscale. Subjects were asked to identify who they thought had income above $150,000 a year and who earned less than $35,000. The result of the experiment was that the subjects sorted the photos correctly 68% of the time—far more than simple chance, says the article. In a follow-up experiment, photos of people looking intentionally happy were much harder to sort by income and class.

For a jeweler, the bottom line is that your job is to sell jewelry, not to worry about whether the client can or should be spending their money on it. If you can make the customer feel positive about shopping with you, confident that they’ve made a good choice, and that the product is going to reflect their values and success (wished-for or real), then you’ve got a good chance of turning a new customer into a permanent client.

Next article:
Shopify: Google Is Prioritizing Site Speed. Are You?