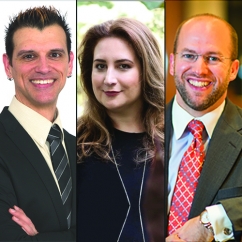 Merrick, NY—In today’s marketplace, more jewelers are actively reaching out to the LBGTQ community, especially to connect with those who have weddings in their future. The Centurion spoke with experts (from left in image) Matthew Perosi,Jeweler Websites,Inc., Severine Ferrari,Engagement101.com, and Phillip Bosen,Bosen Associates on this subject.

Perosi remembers when the United States Supreme Court legalized gay marriage nationwide in 2015. “ There was a flurry of interest from all areas of the jewelry industry because of the idea that there would suddenly be a new type of customer walking into every jewelry store.”

The realization of that new business never lived up to the expectations, he acknowledged, but says most jewelers didn't understand how to attract this potential new client segment, nor was it understood that this client segment also needs to feel safe while shopping.

"The concept of feeling safe while shopping at a jewelry store has nothing to do with potential armed robbery, but rather the establishment of protections against further emotional harm," said Perosi.

“If you treat your customers with dignity and respect, they will want to do business with you,” says retail consultant Bosen. “Salespeople with a company that models inclusivity and wants to sell to everyone is what this market is looking for.”

Ferrari,founder of Engagement 101, a consumer website of all things engagement, embraces inclusivity also. “The language we use is understanding of younger generations’ approach to gender identification and gender roles. It is our understanding after speaking with a lot of couples, that they want to feel represented and included, but they don’t always want to feel ‘different.’”

George Blair IV, Jeweler Websites Inc., explains that, "Jewelers must be part of the community if they intend to serve it. Language and behavior must be explicitly open and affirming, which may seem like a simple idea, but it really isn't. Understanding what it means to be explicitly open and affirming isn't just the notion that a jeweler instructs all employees to treat all customers with respect. It's the express practice of showing the local community that LGBTQ customers are welcomed into their store.”

Finding the right jewelry. While there are some jewelry lines designed to appeal to same-sex couples, jewelers will do much better by just thinking “couple,” not “same-sex couple.”

“Our ring styling approach is that there’s not specific jewelry for LGBTQ people. Anyone can wear anything,” says Ferrari. “For two brides, they are not generally purchasing the same rings. They want to express their different personalities.”

Blair recognizes that, "People are going to be looking for jewelry that resonates with them, not necessarily with their gender identity or sexual identity.”

Perosi adds,“When someone is shopping for wedding jewelry they should be guided over to the entire collection of all available wedding jewelry and asked what they have in mind. Let the customer guide the initial conversation and give them plenty of freedom and comfort to gravitate towards the wedding rings they are interested as well as select the pronouns they want to use to describe their significant other. Never assume the pronoun for their significant other, even after they reveal the other person's name.”

Language matters. “It’s time to lose the word bridal and replace it where applicable with wedding or commitment jewelry,” said Bosen. De Beers already figured this out: starting in 2019, it dropped the word “bridal” and put all engagement and wedding jewelry under the umbrella of “commitment jewelry.”

Perosi agrees. “Above all else, the entire jewelry industry is guilty of using the word ‘bridal’ to refer to the entire collection of jewelry that is intended for engagements, weddings, and anniversaries. I hate how ingrained the word ‘bridal’ is in the hearts and minds of retail sales staff, jewelers, designers, and manufacturers. Even when I ask a jeweler what lines of ‘wedding jewelry’ they carry, they always answer with references to their ‘bridal lines.’”

Similarly, he says a jeweler should no longer ask a man shopping for a wedding ring to “tell me about her,” or to ask a woman customer to "tell me about him and his tastes." When someone is shopping for wedding/engagement rings by themselves—or any gift, for that matter—he suggests a jeweler always refer to their significant other as "the lucky person" or similar gender neutral phrasing. Language experts now have designated “them” as a gender-neutral alternative pronounm for “him” or “her,” not just as a plural reference to a group of people.

Worried what other customers might think? “Many jewelers are still afraid they will alienate their existing customers by creating marketing campaigns that would show same-sex and gender neutral couples sharing tender or casual, everyday moments at home or in public,” says Perosi. He suggests reimagining ads with a couple of men, a couple of women, or a couple of people whose genders are not apparent.

A study published by Statista in October 2020 revealed that nearly 50% of respondents said that the appearance of a same-sex couple in an ad would not change their purchasing behavior, and only 18% said that they would be less likely to purchase a product because of those ads.

“If the display of same sex couples together is something that a jeweler is not willing to commit to, then the easiest way to portray inclusivity is to show a groom by himself or a bride by herself rather than always heterosexual couples pictured together,” he suggests. He also notes that attitudes against same-sex marriage tend to be stronger among older demographics, many of whom either already have or soon will slow their jewelry-buying habits. That theoretical 18% of customers that jewelers are afraid to lose may not be contributing much to the bottom line anyway.

Further reading: Since 2015, The Centurion has published several articles on this market. Marriage Equality and Your Business, Expand Your Wedding Market Reach by Connecting With The LGBT Community, and Five Ways to Tap Into Affluent and Lucrative LGBT Market. These articles have held up well overall for their content, and are worth a read (or re-read) if you are trying to connect to this market to offer a deeper look at this important community.

Next article:
Trendspotting: The Amazing Sales Power Of The Good Luck Charm