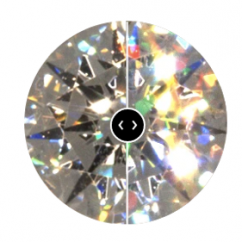 San Diego, CA—Sparkle Cut Technology is a new nanotechnology developed to improve the sparkle appearance of average-looking diamonds, allowing retailers to compete on price with better-looking lab-grown stones. The company that developed it is now making its “Sparkle Improvement Service” available to all sectors of the industry: manufacturers, wholesalers, and retailers. Image: a before-and-after photo of a diamond using the technology.

The new technology—employing techniques used in the biotechnology and semiconductor industries—uses a focused ion beam to create microscopic grooves in a cut diamond’s facets. These grooves, about 1/5 the width of a human hair, redirect light to the table, creating the appearance of more sparkle.

“Both AGS and GIA have said it does not change the integrity of the diamond, and it loses no weight,” maintains Pat Henneberry of Sparkle Cut Technology’s management team. Henneberry has worked in the diamond industry for more than 30 years as a trainer for the former Diamond Promotion Service, Hearts On Fire, and other top brands.

The classic facet arrangement of eight perfect hearts and eight perfect arrows lining up to create windows that reflect off each other is what creates sparkle. Having exactly the right math for maximum light return is the driving concept behind cut-focused brands like Lazare or Hearts On Fire. But Henneberry says not all diamonds that get either GIA’s or AGS’s top cut grades have perfectly proportioned hearts and arrows, and the point of Sparkle Cut Technology isn’t to wade into the cut-grade fray; it’s to make average diamonds look better.

“If you take a J-I, SI2 with a good or even very good cut, there will be places where light escapes,” says Henneberry, noting that light usually escapes from the pavilion. By putting nano-grooves in, it reflects and returns more light back up and out of the table, increasing sparkle. Tests in the Gemex light performance machine offer proof, she said.

“We’re sending them the same stone before and after we do the technology. It increases light performance 50% to 100% every time,” she says.

It also increases the retailer’s opportunity to make a natural diamond sale, especially to consumers who want a bigger stone than their budget allows.

“A lab-grown stone looks great coming out of the lab, but if someone wants a comparable natural and can’t afford it, they can go down in color and clarity but Sparkle-Cut it. Then it looks great and they can afford it,” says Henneberry.

While the company had initially planned to launch a diamond brand, it has redirected its focus to selling the Sparkle Cut technology as a service for members of the industry to use on their existing diamonds, rather than selling diamonds themselves. Prices for the service are based on volume and carat weight. At present, the service is only available for rounds; it will be available for fancy shapes in the future.

For those interested in seeing Sparkle Cut Technology for themselves, the company offers to send a demo diamond for review. Alternatively, manufacturers and retailers are invited to send five or more diamonds to SCT’s facilities for Sparkle Cut Technology to be applied. For information, email phenneberry@sparklecut.com

Next article:
Pomellato Exec Says Independents And Department Stores Aren’t Rivals; And Tells Why Instagram Is Everything