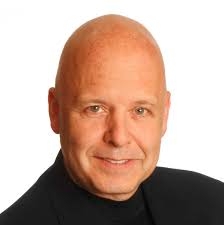 Kristina Buckley Kayel, managing director of North America for the DPA, opened the event with an outline of key highlights from the organization’s “Totally Clarity” report and listed the complementary assets that will be available for retailers to use in their own marketing.

Hyken addressed the biggest challenge retailers of all kinds are facing: that competition is no longer limited to direct competitors but consumers are comparing each retailer to the best service they’ve ever had.

“It’s the guy who sold me these shoes and spent 45 minutes finding the right shoe and then looked online himself to make sure he’s giving me the best price.”

Customers are smarter than ever before and expect and demand the best service, which raises the bar continually, Hyken said. “Satisfaction Guaranteed is not a guarantee. Satisfaction is a rating; loyalty is an emotion. We want to inspire them to come back and refer their friends, which doesn’t happen if we just satisfy our customers.”

“Fine is the F-bomb of customer service! ‘How was your experience with us?’ ‘It was fine.’ FINE = Fake smile, Insincere feedback, Never coming back, Emotionless. We need to be better than fine!” 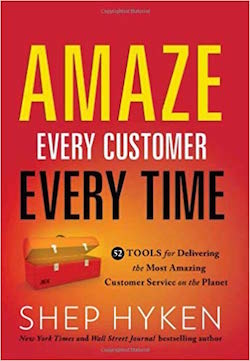 One of Hyken's many books

Any time a customer comes into contact with a business it’s an opportunity to form an impression. In the airline industry, that starts with making a reservation, through to check-in, even passing flight attendants walking in the airport. Are they smiling? Even those employees without customer contact, such as baggage handlers, still impact the customer experience.

“Even the smallest opportunity to form an impression matters,” said Hyken. The Walt Disney company trains its employees (called cast members) to “manage the magic” during their training. The company has specific rules: if a cast member is walking through one of the parks, there are set things they must do—smile, acknowledge, greet—if they’re within 10 feet of a guest, five feet of a guest, or closer.

Moments of misery—moments of truth, Hyken calls them—are going to happen.  It’s inevitable, but how they’re handled is what inspires confidence.

“A moment of misery is a gift because you have the opportunity to restore confidence.” He related the story of a cabbie he met in Dallas. It was the hottest day of the summer and the cabbie looked a mess. His shirt was rumpled, he looked unshowered, unshaven, and Hyken assumed the cab’s air conditioner won’t work and expected springs to pop through the seat. The cabbie said get in, it’s cool and I’ll take care of your bags.

Not only was the cab cool, but he had two newspapers folded neatly on the seat, a bucket of ice with two sodas and a dish of candy. All no charge for the same $22 flat rate any cab would charge to the airport.

He asked for a business card, gave his and said anytime Hyken returned to Dallas, call him and he’d pick him up at the airport like a private car service, but for the same $22.

As it turned out, Hyken did once return at 5:30 a.m. and was met by the same cabbie (named Frank), clean shaven and neatly dressed. He just had a fast-growing beard, it turned out. Hyken asked about the papers and sodas.

Frank routinely asked hotels for the leftover guest papers, and spent a few dollars on soda cases once a week. “Most guests don’t drink it but they offer an extra $2 or $3 in tip. The sodas cost me less than $1 each so it’s a good investment. He sent all his rides a thank-you note and Christmas cards (to their business card address).

The upshot? The average cabbie was making less than $20,000 per year—and Frank was making more than $100,000. By having people call him instead of waiting hours for his next fare, he made a ton of money. He’d have to wait 15-20 minutes for the guest but it was far less than hours.

“If a taxi driver can do it, we can all do it,” said Hyken. “Manage your first impression. The first interaction is just the first, but everything that starts a conversation matters.

The same applies for pets—but he warned do not ask about a spouse; let them bring that up!

Moments of magic happen when you ask the extra question. “How quickly do you need this?” If you can’t meet the expectation, explain why can’t they get the repair in 20 minutes.

“Realign their expectations. ‘Can I get it in 20 minutes?’ ‘No, but here’s why.’ So when it’s ready in two hours, they say ‘I can’t believe you did it so quickly.’”

He related an anecdote about the importance of asking the extra question.

“My wife and I were out on a date night, and we passed Baskin Robbins. She said, ‘Honey, would you like to stop and get some ice cream?’ I said no and kept driving.

What she was saying was, ‘I want ice cream, I don’t care if you don’t, pull over and we’re getting ice cream.’ I could have saved the whole night with the extra question, ‘no, do you?’ but I didn’t.”

Acknowledge and apologize go together. “I understand why you’re upset, I’d be upset too, thank for bringing to my attention. I’m sorry that it happened, this is not what usually happens and not what should happen.”

Next, “This is what we’re going to do to fix it.” Don’t ever throw anyone else under the bus even if it wasn’t your mistake, he emphasized. Just own it and fix it.

He related the story of a restaurant where everyone’s salads looked beautiful except his, and he asked the server about it. The answer was, “Hey, I don’t make ‘em, I just serve ‘em,” essentially throwing his coworkers under the bus. The appropriate answer would have been “I can’t believe I missed that, I’ll take it right back and get you a new one.” Own it and fix it even if it’s not your fault.

“In crisis situations major brands have had, you can see the companies that follow these steps and manage it well—such as Nike where a famous college athlete’s shoe broke in a major game—and the ones that don’t, such as United Airlines’ taking two weeks to own a situation where a passenger was wrongly and abusively removed from a flight.

Finally, in addition to those five, be convenient and easy to work with. Why do hotel guests pay five times as much for a mini-bar soda than walking to the vending machine? Because it’s convenient.

“Amazon recognizes that. Amazon is not cheapest anymore, but customers still buy because it’s convenient.

Hyken suggested jewelers develop a subscription service, such as charging an annual fee and getting jewelry cleaned and appraised as often as they need. Delivery also is important and can be an advantage for jewelers—either delivering the goods or sending a car to pick the customer up.

But ultimately, what really matters is consistency. “Everything we’ve talked about needs to be an all the time thing.”

And number seven is a positive attitude. “Employees always need a positive attitude to be great every day. Colleagues are going to feel good about working with each other and everyone putting forth effort, which impacts the vibe in the store.”

All business is numbers, he concluded. If you increase satisfaction and consistency, it translates to an increase in the bottom line. “When you know the number you want to hit you can hit it.”

Next article:
Powerful Referral Strategies That Will Clone Your Best Clients