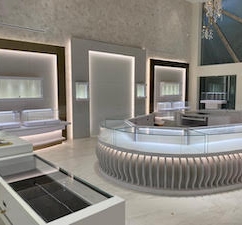 “This by far is one of the most stylish stores we have ever built at Artco Group,” says principal Mickey Miñagorri. “Justin is a person who sees something and knows what he wants. This is a beautiful store, unique design, but very functional.”

While the jeweler does employ traditional front-to-back cases, he’s also incorporated ones with a pullout feature, says Miñagorri.

But perhaps the most distinctive feature of the store are the fluid fins decorating the center showcase and select other cases. As a design element, fins have suggested modernity and futurism since the post-WWII period, when everything from home décor to automotive design celebrated first the new jet age and then the nascent space age.

In this case, the fins were made with wood, laminate, and a textured fabric, and special lighting underneath the cases was added.

The store overall is light, bright, and open. While open concept is the leading design trend across both residential and commercial interiors—not just retail—independent jewelers today are not looking to overwhelm people with product, says Miñagorri.

“We’re putting cafés in stores and making the environment a lot more friendly, a lot more homey. Diamonds have to be sexy and romantic and put in an environment conducive to that.” He says that’s why bridal bars are so popular, letting customers relax and have a drink and shop, rather than being at a desk in the back of the store.

A light beige marble was used on the floor and as cladding on showcase bases. Since MK Diamonds is a Forevermark manufacturer and retailer, a Forevermark counter anchors the back wall. The jeweler also wasn’t afraid to use wall space for display—common in Europe with its much tighter spaces, but something most American jewelry stores typically don’t do, says Miñagorri. But pull-out cases make wall displays practical for selling, not just enhancing the brand. 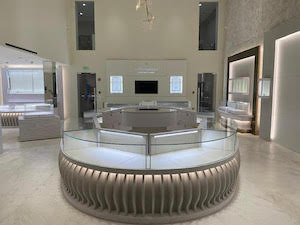 Above, the Forevermark counter anchors the rear of the store. Below, a closeup. 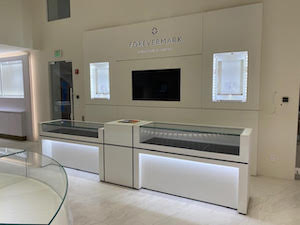 Technology also plays a role in the evolution of store design, explains Miñagorri. For example, jewelers no longer need a big POS station. But perhaps the most important aspect of modern technology is lighting. Jewelers now can install different lights for diamonds, colored stones, watches, and more.

“In the old days you had the same lighting for every product. Now you adjust lighting based on the products you’re going to be carrying.”

Miñagorri says it’s not limited to in-case lights. “As soon as you take a diamond out of the showcase it loses sparkle, so you have to have the right lighting over the showcase.”

And in a nod to the popularity of industrial chic, at the top front of the MK store is a large tinted window dressed with an industrial-looking element evocative of a builder’s square. It’s more interesting—and better for selling—than just a plain window that lets too much light in. Yes, there is such a thing, especially when showing diamonds, Miñagorri laughs. 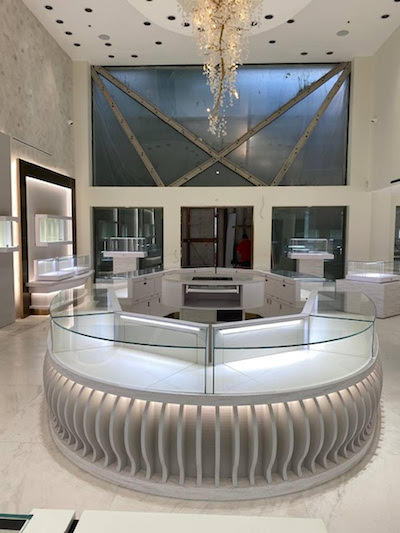 The rugged industrial vibe of the top window offers a contrast to the organic chandelier and futuristic fins.

But he also says the difference between planning a store and doing it right, vs. just getting a bunch of cases and putting it together, is 25% to 30% in sales. “We’ve proven that. We’ve gone into good stores and made some changes, and they do 30% more.” Existing customers appreciate the design improvements, but it also attracts new younger customers, he said.

“We saw through the pandemic that a lot of people went out and started buying a lot of diamonds. We saw clients that sold more this year than any other year. There is a demand for it.” Trust is critical, he says, and design helps instill it. “Store design so important. You have to create a beautiful experience so the customer feels like a VIP and that they’re getting a good product.”

Next article:
Boots On The Moon: How To Use ‘Gee-Whiz’ Fun Facts To Close A Sale