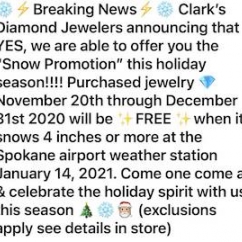 Coeur D’Alene, ID—Jane Clark is really, really hoping for a snowstorm this week.

If her town gets more than four inches of snow on January 14, Clark’s Diamond Jewelers customers who bought jewelry for the holidays can get a full refund, courtesy of the insurance company backing a retail weather promotion program popular in the jewelry industry.

Basically, the program works like this: the jeweler picks both purchase dates and a snow day. If a certain amount of snow falls on the snow date, customers who bought jewelry during the designated purchase period will receive full reimbursement for their purchases, and still get to keep their pieces.

“Jeweler Jane” Clark, third-generation owner of the 114-year-old family-owned store, ran into some controversy last year over the promotion, backed by Beazley Insurance Co. and its agent Spectrum Weather Insurance. The promotion promised a refund for holiday purchases between November 22 and December 31 2019, if it snowed at least three inches on January 11, 2020.

When a snowstorm hit overnight from January 10-11, 2020, Clark thought it would be obvious to everyone. But a dispute ensued over exactly how much snow did fall, with a local climatologist, Cliff Harris, measuring 3.6 inches and the insurance company’s weather monitoring service measuring much less. The insurance company denied the claim. Both Clark and Harris sent multiple pieces of documentation of the higher amount, and the dispute almost went to court before the insurer did agree that enough snow fell to justify the payout, about $500,000. The jeweler hosted a customer appreciation party in late February last year for the 400 or so customers entitled to reimbursement.

The experience didn’t intimidate Clark, who is running the promotion again this year. After consulting Harris again, she settled on January 14 as the snow date, with a slightly higher amount—four inches, vs. last year’s three. Alas, the local CBS TV affiliate, KREM-2 (Spokane, WA), says it’s probably not going to snow in the area at that time, or if it does flurry, it won't be enough to hit the necessary mark in 2021.

Ironically, Clark’s father, Dan, ran a snow promotion in 2005 with a different insurer—and had the exact same issue. He too ultimately prevailed, to the tune of about $250,000. “Diamond Dan” is still active in the business, according to the company website, bringing 50 years of experience in diamonds and gemology. 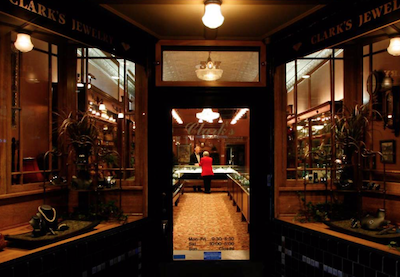 A look inside Clark's Diamond Jewelers, with Jane and her father, Dan, at the back counter.

In the KREM interview, Clark told a story familiar to many independent jewelers: she was looking forward to a solid 2020 and had geared up with extra inventory for customers to spend their winnings at the party. Everything was going along smoothly until the pandemic hit, creating a few very anxious months for the jeweler, who wondered how they’d manage to keep their staff. But like many of her peers, ultimately 2020 turned out to be a banner year for Clark, with both longtime loyal customers and new customers shopping, and a “terrific holiday season,” she told KREM. Indeed, lots of customers were eager to try for the snow promotion again.

Next article:
Tiffany Top Execs Are Out As LVMH Merger Wraps