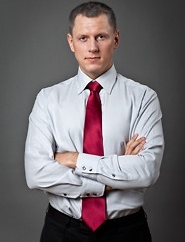 Merrick, NY—While stratospheric price predictions for gold earlier this year didn’t even come close to materializing, there’s still some debate among experts as to what the metal will do from here. While gold has dropped 4.33% in the last 30 days—closing at $1862 Monday—at least one bank, Standard Chartered, predicts it will return to $2000 in the next couple of months. Its peak was $2,067 on August 6. Image: Gold expert Przemsylaw Radomski is currently bearish on gold.

Standard Chartered precious metals analyst Suki Cooper told Kitco.com the metal’s price drops in November (and potentially also December) suggest that the weak long-term positions have been flushed out and since the underlying macro drivers like a weaker U.S. dollar and loose monetary policies worldwide are supportive of gold, it should return to $2,000 within the first quarter of 2021.

But gold analyst Przemsylaw Radomski, founder, owner, and main editor of Sunshine Profits.com, a website offering information and professional support for precious metals investors,is seeing some down patterns playing on repeat. In an article for Yahoo! Finance, Radomski says gold prices now are moving in almost the exact same pattern as they did in the period from 2011 to 2013. In the article, he took gold’s current price chart and overlaid it on top of 2011-2013’s chart to prove how close the two patterns are. 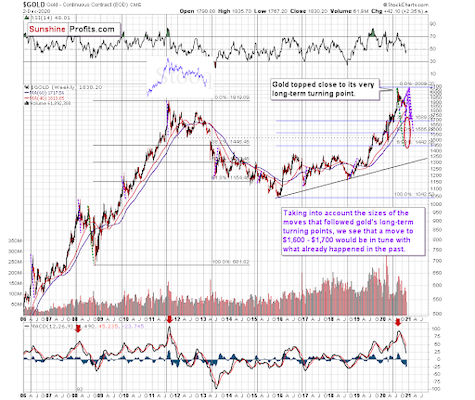 Sunshine Profits' founder Przemsylaw Radomski overlaid recent gold price patterns over those from 2011-2013 in his chart from Yahoo! Finance.

“History tends to rhyme and that’s one of the foundations of technical analysis in general,” he wrote. For that reason, his short-term outlook remains bearish, and he thinks a drop to $1,600 an ounce would not be out of the ordinary. Indeed, if the historical pattern follows 2008, rather than 2011, it could go as low as $1,450.