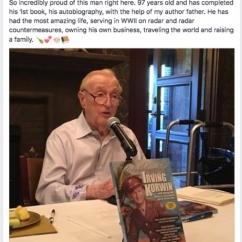 Korwin is the son of eastern European immigrants who arrived in the United States through Ellis Island in New York. He was born in August, 1920, in the Bronx borough of New York City, raised during the Great Depression, and enlisted in World War II right after the bombing of Pearl Harbor.

He served in the United States Army Air Corps (forerunner of today’s Air Force) as a sergeant with top-secret clearance. His role was training pilots and military VIPs in the use of RADAR (Radio Detection And Ranging) and radar countermeasures at a discreet Army Air Force base in Florida. The project was so hush-hush at the time that the word “RADAR” couldn’t be mentioned publicly. In both European and Pacific theaters, radar—which allowed soldiers to see the enemy over the horizon—was credited with serving a pivotal role in the success of the Allied forces.

Korwin began compiling his autobiography at age 96. The Autobiography of Irving Korwin is available from Bloomfield Press. The now 99-year-old survivor of history tells about his world travels, the jewelry business he built, and the personal reminiscences he managed to capture, with an extensive photo section. Korwin also gives occasional radio interviews.

New York, NY--Jewelers for Children (JFC) will be celebrating its second annual JFC Day this Saturday, September 28, 2019. The day is all about Jewelers for Children and the wonderful work that the jewelry industry is accomplishing by supporting JFC. For ideas on what you can do to celebrate--on Saturday or any other day--click here.

New York, NY—All new and existing members of the Plumb Club are now required to become certified members of the Responsible Jewellery Council (RJC). The Plumb Club, a current RJC association member itself, is the first organization of its kind to require its members to follow the RJC Code of Practices, and its members voted overwhelmingly to approve the measure.

“Our new bylaw confirms The Plumb Club’s vision of being a responsible supply side organization recognized for leadership, adding value, and positively impacting the jewelry industry,” said Michael Lerche, Plumb Club president. “We strongly believe that any jewelry retailer who buys product from a non-RJC member is taking a very serious and unnecessary risk. Buying product from a Plumb Club member will greatly mitigate that risk.”

“The Plumb Club’s actions set a clear leadership example for other trade associations and member organizations within the jewelry industry. The Plumb Club’s model of cascading RJC membership through its members is a model for other associations to confidently follow,” added David Bouffard, chair of the Responsible Jewellery Council. “At the RJC, we believe that building consumer confidence is not only important for the future of our industry, but is also an imperative that can be acted on today by joining the RJC.”

The RJC will collaborate with current and future Plumb Club members to ensure they adopt the RJC Code of Practices and effectively communicate their RJC membership status to their customers and business partners. Both Lerche and Bouffard called for all current and prospective RJC association members to cascade RJC membership throughout their organizations. 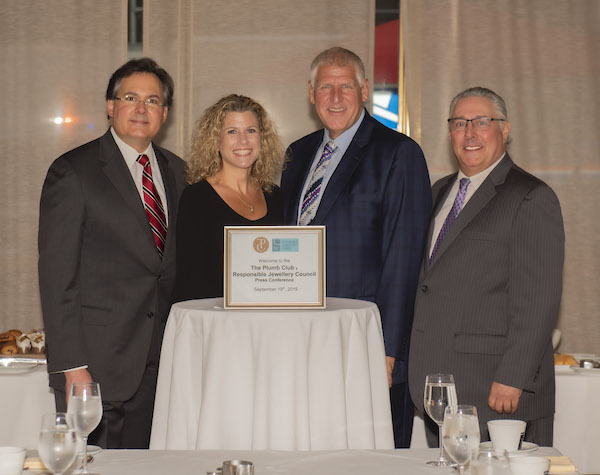 From left: David Bouffard and Brandee Dallow of the Responsible Jewellery Council; David Lerche and Lawrence Hess of the Plumb Club.

“Having a standardized universal code of practices throughout our industry that the retailer, consumer and even our government, can rely upon to guarantee that these products are the most responsibly sourced and ethically produced in the marketplace is critical. Today, we call on the entire jewelry industry to support the Responsible Jewellery Council and work with us in finding a way for every supplier and retailer in our industry to become a member,” said Lerche.

“As chair of the RJC, I ask other trade associations within our industry to follow the leadership of The Plumb Club and require your members to join the RJC,” added Bouffard. “The RJC has a team ready and willing to help your organization develop its own model of cascading RJC membership.”

All certified members of the RJC can point to the RJC’s publicly available Code of Practices to validate that the products they buy and sell are responsibly sourced. RJC verifies its Code of Practices through full membership of the ISEAL Alliance and is aligned with international standards from the Organisation of Economic Co-Operation and Development and the United Nations Sustainable Development Goals. RJC members must become certified against the Code of Practices through a third party, independent, certification process. For more information, click here and here.

Next article:
Wishing Our Jewish Friends A Happy New Year!