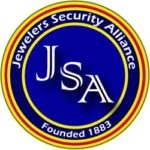 New York, NY—At its 137th annual luncheon on Saturday, Jewelers’ Security Alliance president John Kennedy proudly announced a major milestone in the organization’s history: there were no industry deaths from crime in 2019.

That statistic is one that JSA has pursued but never quite achieved until now, said Kennedy. Although numbers have come way down—from as many as 47 deaths due to industry-related crime in 1984 to only one in 2018—this is the first year that no jewelers were killed in the course of industry-related crimes.

Unfortunately, the zero number applies only to jewelers and jewelry crime. Three non-industry individuals tragically lost their lives in the process of jewelry crimes: in December, a UPS driver and an unlucky bystander both were killed following a jewelry-store holdup gone bad in Florida, and a customer was killed in a firefight with robbers in a Houston pawnshop in November. And while beloved Pennsylvania jeweler Patrick Murphy was tragically murdered on vacation in New Orleans, his death is not considered a jewelry crime.

At the January 11 luncheon, JSA also honored four individuals for their service to the industry and keeping it safe. The organization’s annual Industry Service Award was presented to Christina (Chris) Hackler, global vice president of asset protection for Signet Jewelers, the organization's highest security position.

Hackler, who has 35 years’ tenure with the company starting with Zale Corp., has loss prevention responsibility for the world’s largest jewelry chain. A close partner of JSA for many years, she has served on its board of directors since 2017, providing invaluable information regarding jewelry crimes in the United States and Canada.

Kennedy said, “It is particularly impressive that as a woman Chris has been able to rise to the highest corporate ranks of loss prevention and security in an overwhelmingly male field. There are very few women in such a leadership position in the U.S. in any firm or in any industry. Chris has worked closely with FBI and local police throughout the United States, and is highly respected by law enforcement and her peers in other jewelry firms, as well as in other industries through her leadership role in loss prevention at the National Retail Federation. There is no individual in the private sector who provides more assistance and information to JSA than Chris.”

“It’s a partnership,” Hackler said of her honor. “It’s the result of everyone working together to share information and increase vigilance.”

JSA also annually presents it James B. White Award To Law Enforcement, honoring members of law enforcement agencies that are instrumental in reducing jewelry-related crimes. The 2020 honorees all are FBI special agents based in Detroit, MI: Matthew C. Schuff of the Oakland County (MI) Resident Agency, and Michael Baumgartner and Bryan Toltzis of the FBI Violent Crimes Task Force in Detroit.

The three agents carried out a successful investigation of the recent wave of smash-and-grab robberies that have plagued jewelry stores from Michigan to New Hampshire to Louisiana. Their efforts led to the indictments of 10 suspects. Special Agent Schuff, in particular, worked on a prior major smash-and-grab case in 2014-2015 that resulted in dozens of gang members arrested.

“Smash-and-grab incidents have been on the rise, and they can lead to violence,” said Kennedy. “Many have been violent. And in addition to the loss of merchandise, they also terrorize store personnel.”

Toltzis added, “JSA is a key partner to the FBI and your partnership has been so important to the FBI’s New York office, and now Detroit.”

For tips on keeping your store safe and what to do in the event of a crime, visit JSA’s website here. 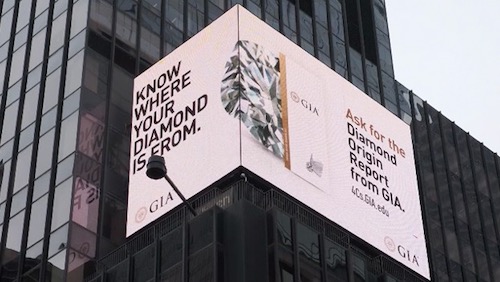 “Over the coming months, there will be millions of engagement moments shared around the world. At the center of most will be the story of a diamond,” said Mark Buntz, GIA’s senior vice president and chief marketing officer. “At GIA, we are proud to give consumers the knowledge to tell that story, and to trust in the quality and origin of their diamond. There is no place better than the heartbeat center of New York City to introduce consumers to GIA’s mission, services and reports.”

Two ads about GIA’s innovative Diamond Origin Report and the 4Cs of Diamond Quality – Color, Clarity, Cut and Carat Weight – alternate on the 56-by-29-foot wrap-around video billboard at 1500 Broadway, on the northeast corner of West 43rd Street. One of the two 15-second spots will run three times each hour from 6 a.m. to 2 a.m. until Feb. 15, 2020. The two videos, along with a third ad focused on diamond shopping that ran from Nov. 15 through Dec. 25, 2019 are also on GIA’s YouTube channel.

GIA first ran ads on the same video billboard during the 2018 - 2019 holiday season. The dynamic ad placement fits with GIA’s long-running effort to help consumers learn about the qualities of diamonds, colored gems and pearls, and how they can ensure their confidence in gems and jewelry by insisting on third-party, research-based reports from GIA.

Launched in 2019, the GIA Diamond Origin Report uses scientific evaluation to match a polished diamond to its original rough, providing confirmation of the origin information provided by the diamond mining company. This report includes information that helps consumers understand the positive social and economic impact that mined diamonds have for the countries and communities that produce them.

New York, NY—In preparation for a massive renovation at its Fifth Avenue flagship, employees of Tiffany & Co. spent a marathon weekend packing up the retailer’s goods and moving them into Tiffany’s temporary digs on East 57th Street, in a space formerly occupied by a Nike store. While jewelry industry insiders are used to seeing millions of dollars of precious metal and gems being carted about—especially in preparation for a trade show—it’s quite a novelty to the outside world. So much so that the New York Times ran an article this week detailing the process which was, of course, an exercise in the tightest possible security.

Times reporters, it seems, were blown away by the level of security: 300 cameras covering the old store, new store, and the 50-foot walk between the two were monitored at both locations as well as from a remote warehouse in New Jersey; all jewels were carefully scanned and logged in before packing and re-checked and logged upon receipt at the new location; the entrance to the new location was shielded from public view with a tent; and employees received firm instructions not to mention any part of the move on social media. The retailer also employed a professional firm to conduct backup monitoring of social media to watch for potential criminals, and uniformed New York City police officers lined the short route the rolling locked jewelry carts—in signature Tiffany blue, of course—were to take between old and temporary digs. 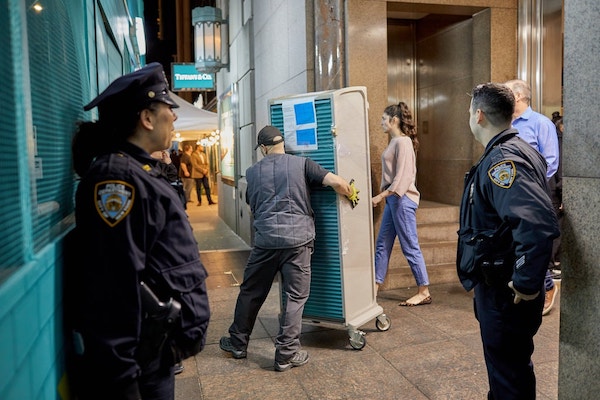 Even Tiffany's rolling carts are decked in its signature blue. Image: The New York Times

Nothing out of the ordinary to those in the know, but apparently quite interesting and/or amusing for the world at large. And just think: they get to do it all again when the flagship store renovation is finished. In the meantime, there’s always Las Vegas in June if anyone needs to marvel some more at the intricacies of jewelry transport.

Previous article:
Hearts On Fire And Forevermark At The Critics’ Choice Awards