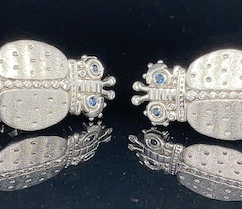 New York, NY—The Platinum Guild International uses its channels to educate both industry and consumers alike on the many benefits of platinum, but what's more special than a personal story about a treasured piece of platinum jewelry? In a new on-going series, PGI will be sharing stories from its trade partners about their own favorite platinum jewelry and what makes it so important to them.

Jeweler John Green of Lux, Bond & Green, a luxury jeweler with six stores in Connecticut and Massachusetts, was featured in the first edition. Green, a fourth-generation jeweler, talked about his platinum cufflink and studs (top image) he commissioned from the late Alex Sepkus. Says Green:

"My favorite platinum piece is a stud set that I found in gold and asked Alex Sepkus to make in platinum.  I thought the set was very cool and every time I wear them, I get compliments and questions about them. People always say, 'ooh, those are so cool.'  And when I tell them they are platinum, they say, 'that’s even cooler!'  I wear them every time I get dressed up. They are beautiful, feel good and are very special to me, just like platinum."