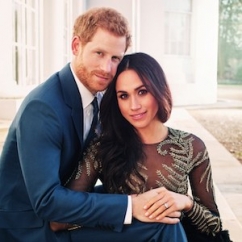 New York, NY—What is going to be the next halo ring?

If this reminds you of early-1990s discussions of the next tennis bracelet, you’re not alone. The jewelry industry, which at times has a real struggle with innovation, is very focused on seeking successors to its big sellers. Could this be one of the things holding it back from innovation?

At last week’s Vortex: Day of Light conference, hosted by Initiatives in Art and Culture, one of the panel discussions addressed this very issue. “With This Ring: From Mine To Market and Beyond Bridal,” moderated by Michelle Graff, editor-in-chief of National Jeweler, included Jeffrey Skaret and Kevin Lane of Forevermark, and gem merchant and author Benjamin Zucker.

As vice presidents of business development and partner development of Forevermark, respectively, Lane and Skaret said the halo is on the downtrend, and simpler styles and custom designs are on the upswing. 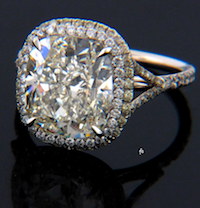 The halo ring reached iconic status just like the tennis bracelet did 30 years ago, but industry experts say it's starting to wane as demand for simpler styles rises. Here, a Forevermark Exceptional Diamond cushion halo.

“People are looking for the next halo,” said Lane. “I think it’s a little overplayed. It’s beautiful, but what we’re seeing among Millennials is a desire for authenticity, creativity, and to design pieces uniquely theirs.”

“You don’t have to look far to see that in addition to having things customized, they’re also simple,” added Skaret. “Tiffany launched a new solitaire with a T coming out of the shank: essentially a solitaire with little extra treatment to it.” Jewelers are reporting products becoming less floral, less intricate, a little more simple, he said.

Zucker explained the rising popularity of older style cuts. “Over the past 400 years, diamond engagement rings always have been a struggle or love affair between the return of white light or splitting of light into color. All these new diamond cuts are splitting diamond into more light, but now there’s a love of old cuts where you see a flash of light splitting into color. Tension between those is what I see today.” 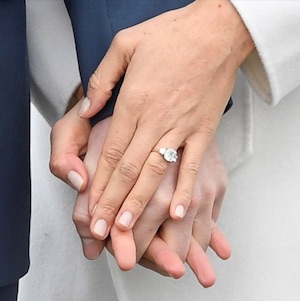 Did Meghan Markle's engagement ring spark a trend for three-stone rings? Either way, it's definitely helping drive the trend for cleaner, simpler, and less lacy settings.

“I think a lot, and also because jewelry is in museums. Jewelry has become not only the provenance of extraordinary celebrities but also the arbiters of tastes, the museums,” said Zucker.

In dressing celebrities for red carpet events, Forevermark’s focus is getting the brand’s name out there, said Skaret. “But from a style standpoint what we’re seeing more of are ovals, pear shapes, more rounded edges than straight.” 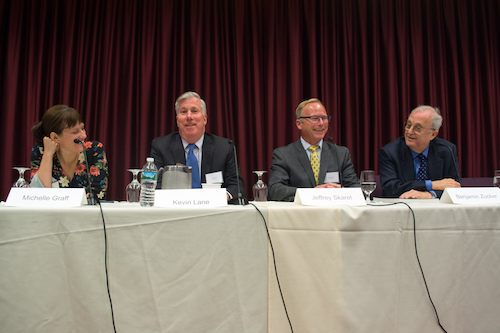 Customers may not buy a product just because a celebrity wore it, but who the celebrity is does matter, said Lane. “What do they stand for? That matters to consumers.” Forevermark doesn’t pay celebrities to wear its brand—it’s all driven by the PR team, said Lane—but once a celebrity is wearing piece what they do relate to is what Forevermark stands for, not just the beauty of the piece. “They’re eager to talk about responsible sourcing and so forth,” said Lane.

Graff concurred. “Whether it’s coffee or a T-shirt or a diamond, consumers today want to know ‘Where did this come from?’ and ‘Who made this and does this product contribute to their lives, and were they treated well or mistreated making this?’”

“Everybody who touches the diamond on its Forevermark journey is benefiting, whether it’s empowering women [in diamond-producing nations] with education and health care to have a healthy life and produce for families, or offering health care to mine workers and so on,” said Lane.

“Our research is telling us origin is important,” added Skaret. “People want to know where the diamond is coming from. Not necessarily learning about every set of hands it went through along the way, but they want to know that it has done good on its journey and has had positive impact on people’s lives.”

Forevermark can talk about is its four producer countries and the good diamonds have done there, he said. “Those are real impacts. The challenge is getting those stories out there in a positive way without patting ourselves on the back too much. Forevermark gives retailers tools and ways to get that out at the counter without overwhelming customers with all those statistics and data.” 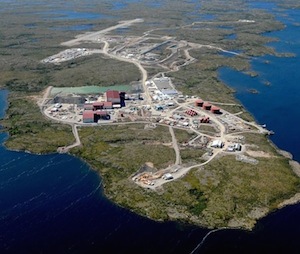 De Beers' Snap Lake mine in Canada has brought opportunities to indigenous people there, just as its mines have in Africa.

Zucker reminded the importance of brick-and-mortar retail. “When a couple comes to my office, we always put out five diamonds [of similar price] next to each other. The eye is so sensitive they can say they like one so much better than the others. Then we show them the crown and facets. That’s the big advantage of a retail store: you can put a stone in front of customer and explain the stone, you don’t just read off specs from a report.”

No diamond discussion would be complete without mention of lab-grown stones.

“Retailers can’t decide whether to be in the lab-grown business or not,” said Lane. “Is it more or less responsibly sourced than natural? We have found a place where we think they belong, which is in the fashion sphere.

“Let’s be honest, lab-grown diamonds are not rare. They can be mass produced. De Beers’ Element Six has shown you can predetermine the outcome. If you want different colors, adjust the heat. You can add inclusions. The jury’s still out for many people, but we feel comfortable in the space we want to sell lab-grown diamonds.”

It does have a proven place in the industry, he emphasized. Where it sits and consumer perception is key.

“Whether it’s comparable to a natural diamond that’s been in the earth for thousands of years and not reproduceable is critical for the consumer to recognize—and incumbent on the industry to clarify.”

“If your goal is to find someone to love and spend your life with, a token of that is to give something of value. Something that came from the center of earth and more real than real,” said Zucker.

“That’s a fair point, but consumers will compare!” argued Graff. “Do they want a one-carat manmade, or a much smaller natural? The industry does a lot of talking about lab-growns, but at end of day it will be consumer who decides.”

“When people buy a diamond, to them it represents a lot of money. Often they spend more than they should because they’re really engaged in giving something meaningful,” countered Zucker. “In the back of their mind there’s always a slight feeling of a store of value.”

Either way, argued Skaret, the health and sustainability of the industry is tied up in its responsibility to consumers.

“We’re in a business that has a lot of black eyes, and we don’t have to look very far in the chain to find them. Whether some guy in Florida is accused of switching a stone, or finding a grading report for a stone scratched with a false number, and so on. We simply must un-blur the lines between natural and lab grown. I think that’s what De Beers is doing by putting lab-grown on the market at a price that’s fair and repeatable.” 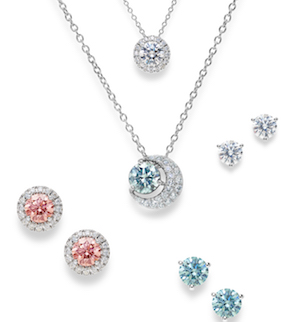 A selection of Lightbox lab-grown diamond jewelry from De Beers.

The panel also touched on Millennials and women. De Beers’ latest Insight Report, which came out in September, found 62% of total diamond consumption worldwide comes from Millennials, and there’s been a tremendous shift to female self-purchase.

“Those two together will dwarf Boomers in buying power,” said Skaret. The other thing that came out of research is the allure of diamonds. The words are same from generation to generation. The reasons Gen Z and Millennials buy diamonds might be different, not just traditional milestones in life, but the words they use to describe them are the same.

“Do you think the industry is doing enough to appeal to women who want to buy diamonds for themselves?” asked Graff.

“NO!” chorused all three panelists. Although Zucker said more and more women are becoming collectors, Lane said the industry isn’t marketing enough to them, while Skaret emphasized how much the industry still needs more women in leadership positions.

“Who knows women better than women, the core of our users? The ones we’re trying to reach and speak to? We need to do a far better job from a marketing standpoint to get to their hearts and minds. We need more women leaders.”