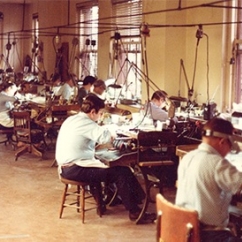 New York, NY—Oscar Heyman is celebrating 50 years in its current location. The 107-year-old company opened in 1912 on Maiden Lane in lower Manhattan, at the time the center of New York’s jewelry industry.

Over the years, the company grew and moved three more times. Its current space is its fourth workshop, and in October it celebrated 50 years there. It was a momentous year for Oscar Heyman, New York City (the Mets won their first World Series) and the nation as a whole, as it was only months earlier that Apollo 11 landed on the moon.

One of the first items Oscar Heyman made in its new workshop, just a few weeks after moving in, was a necklace for Cartier--that ultimately ended up belonging to Elizabeth Taylor. To this day, all Oscar Heyman jewelry is made in this New York City workshop, and many of the firm’s craftsmen have been there more than 30 years. The oldest machine in the workshop is a Hendley lathe, manufactured in 1892 and still going strong. 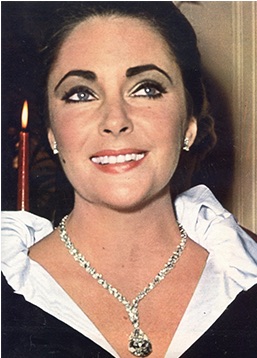 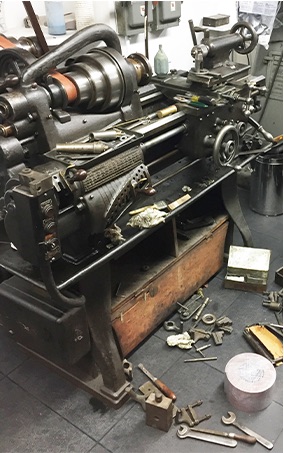 Left: Elizabeth Taylor's famous Cartier necklace was actually made by Oscar Heyman for Cartier. Right: a Hendley lathe dating from 1892 is still being used in Oscar Heyman's workshop.

New York, NY—SGL Labs’ goal is to be a problem solver, proactive in doing all it can to make the jewelry industry stronger and more secure. This is what led it to become one of the two sponsors of the Jewelers’ Vigilance Committee’s new free Diamond Supply Chain Protection Kit.(The other sponsor was the JCK Indusry Fund.)

The free kit is an easy-to-use tool to help jewelry retailers protect the integrity of both their natural and laboratory-grown diamond supply chains. It offers both education and clear direction on how to both describe lab grown diamonds in accordance with recently revised FTC guidelines, and ensure suppliers are providing required disclosures. Of the utmost importance, it explains how to avoid making deceptive or unfair claims, outlining the language that should be used to describe lab grown products.  JVC is also providing retailers with templates for a “Supplier and Business Partner Code of Conduct and Disclosure Agreement.” Again, the kit is free; click here to download. 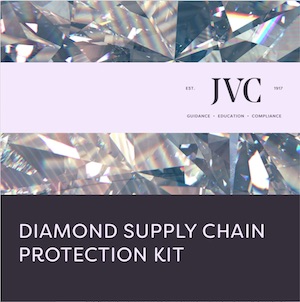 Says JVC, “The Diamond Supply Chain Protection Kit was created as a result of the industry’s need for guidance in this multi-faceted area. We are excited for the industry to use this kit as a resource and appreciate the support of SGL and the JCK Industry Fund in making this kit possible.”

“SGL is proud to co-sponsor this initiative by The Jewelers Vigilance Committee (JVC),” added Steve Feldman, SGL’s vice president of sales and marketing. “As lab grown diamonds enter the mainstream of our industry new concerns and challenges surface that need to be addressed. As always, JVC is at the forefront of this effort, providing critically important clarity, while encouraging best practices throughout our industry.”

SGL is also addressing these concerns and challenges, and Feldman further pointed out the synergy between SGL and the JVC’s new initiative is obvious. With 16 labs worldwide, SGL screens, grades, and certifies loose and finished diamond jewelry, both natural and lab grown. It offers a trademarked line of Dia Screen diamond detection devices, offers mobile labs where SGL gemologists provide on-site services and, for retailers who prefer to move to paperless processes, blockchain-based technology is available.

Rumors that LVMH was sniffing around the jeweler swirled last week and on Monday it confirmed that “preliminary discussions” were held regarding an acquisition and Tiffany confirmed an unsolicited offer from LVMH of $14.5 billion, or $120 per share in cash. Tiffany stock closed at $98.55 on Friday, and soared to $126.50 by mid-day Monday.

Though a release from Tiffany says its directors are carefully reviewing the proposal “consistent with their fiduciary responsibilities and with the assistance of independent financial and legal advisors,” they were not thrilled with the offer, believing it undervalues the company. A report in the Financial Times predicts they’ll reject it.

But Tiffany has struggled in recent years, and analysts anticipate the merger eventually will happen. Brian Nagel, leading Oppenheimer’s team of analysts, told Retail Dive the consensus is that this offer is just the opening step in LVMH-Tiffany buyout negotiations. The retailer is working to improve its position with younger consumers and says it’s successfully executing its plan to become “the next generation luxury jeweler,” but it still is struggling with product and sales recently have slowed again. Its former creative director, Francesca Amfitheatrof, who introduced the “T” line that is selling well, left in 2017 to go to LVMH, something that could be beneficial if the merger goes through, as she has created more successful jewelry brands since her departure from Tiffany.

From a total market perspective, acquiring Tiffany would give the Euro-centric LVMH a greater presence in the United States, its second-biggest market, and put it solidly ahead of rival Kering. Its watch and jewelry division, which includes names such as TAG Heuer, Chaumet, Bvlgari, and Fred, grew 12% organically last year.

Previous article:
Which Website Design Platform is Right For Jewelers?