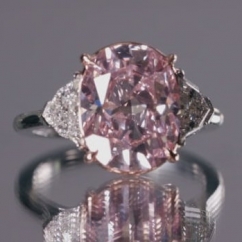 New York, NY—It was a very, very busy week in the diamond world. The Diamond Producers Association announced the upcoming departure of CEO Jean-Marc Lieberherr, the father/son duo of LJ West Diamonds successfully re-cut a five-carat pink diamond on CNBC, and lots of developments are happening in the lab-grown diamond sector. De Beers announced its Lightbox brand of lab-grown diamond jewelry will be sold at Bloomingdales and Reeds Jewelers, Stuller introduced a line of LGD jewelry and, after having taken some hits on its sustainability claims, the lab-grown sector is working to build credibility. Image at left: the five-carat pink diamond recut by LJ West was later set into a platinum ring with two white accent diamonds. Photo, CNBC.

New York, NY—Whether it’s on a celebrity or a house, a strategic nip and tuck can make a big difference. But for Larry and Scott West, the father-son duo behind New York-based LJ West Diamonds, it’s a case of addition by subtraction: carefully shaving a few points off a natural fancy color diamond in just the right places can make a difference worth millions.

The Wests recently went to work on a five-carat fancy pink diamond and invited business news network CNBC in to watch. The pair are experts at strategic diamond surgery, so to speak, and specialize in re-cutting fancy color diamonds to increase the intensity of the color. Not every fancy color diamond can or should be re-cut, but in some cases an expert knows a little “surgery” will change the angle of reflection to bring out a diamond’s natural color better.

But there is a huge element of risk: one slip on the wheel and the stone can shatter, leaving hundreds of thousands of dollars—or in this case, $3.2 million—to vanish in a puff of diamond dust. The Wests have goofed before, but thankfully in this case, the gamble paid off. The five-carat fancy pink was successfully re-polished over the course of two weeks, and resubmitted to GIA for grading again. Its new report was upgraded to fancy intense pink, almost doubling the stone’s value.

Read more here, and click here or on the image below to watch the CNBC video of the process: 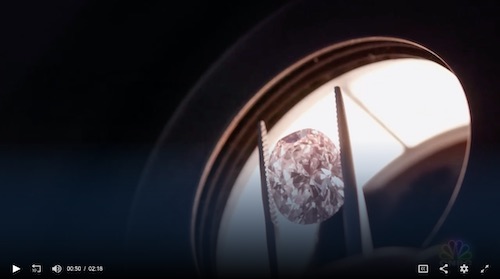 Although the Wests have re-cut many natural color diamonds, this one was particularly significant because pink diamonds are about to become even more rare than they already are.

Related: Get It While You Can: Argyle Launches 2019 Pink Tender As Mine Prepares To Close

Argyle’s just-concluded 2019 Pink Diamonds Tender was very likely one of its last, as the mine is preparing to close. To date, no other mine has produced nearly as many pinks, reds, or purples as Rio Tinto’s Argyle mine in Australia. This year’s Tender featured six hero diamonds and 64 total lots. The annual tender made a tour of key world cities—its New York showing was October 3—before bids closed last Wednesday. At press time, sales figures had not been released.

Lieberherr Exits DPA, To Be Replaced By Fashion Executive

New York, NY—Jean-Marc Lieberherr, inaugural CEO of the Diamond Producers Association, will exit his role at the end of the year. Lieberherr has been with the organization since it was formed in December 2015, initially as its first chairman and later as its CEO. He will step down from his role at the end of December when his contract period ends and will be succeeded by David Kellie, who will start in early December to ensure a smooth transition.

Kellie’s pedigree includes stints at multiple luxury consumer brands, most notably 14 years at Ralph Lauren, where he held executive positions in consumer branding, marketing, and advertising. Most recently, he has been with Watches of Switzerland, giving him insight into the world of fine jewelry and watches.

DPA chair Stephen Lussier said, “Jean-Marc was one of the DPA’s founding members and helped steer the development of the organization from the beginning. On behalf of the entire board we thank Jean-Marc for his leadership, his commitment to the mission of the DPA and his energy in building the organization during its formative years.

Lieberherr said, “This is an emotional moment for me after four years of association with the DPA, but I am proud of what has been achieved since the DPA was created, and especially since it received increased funding from June 2017. The DPA now has strong teams and foundations in place to capture the opportunities that lie ahead and it is time for a new leader to take the organization through its next phase of development.

“I am confident that the DPA will play a critical role in the diamond sector in the years to come and am grateful to the DPA teams and Members for supporting me through what has been a life-changing adventure.”

“We are very pleased to have someone of David’s calibre to take over as DPA CEO, especially given the organzation’s key marketing role,” continued Lussier. “David brings extensive experience to the DPA having led traditional and digital marketing programs across the major global markets. He is extremely well equipped to lead our marketing teams as we seek to inspire ever more consumers of all ages across the world with the ‘diamond dream’.”

Said Kellie, “I am delighted to be joining the DPA at such an exciting time, both for the organization and for the diamond sector. As people search for authentic products with enduring meaning, there are outstanding opportunities to grow consumer demand for diamonds. A growing number of women are buying for themselves, there are already high levels of acquisition from younger consumers, and the number of middle class households around the world is growing rapidly, so there is a very bright future ahead of us.”

The DPA just released its holiday marketing campaign for 2019, centered around video storytelling. Other initiatives DPA has developed include the “For Me, From Me” female self-purchase campaign and redefining the roles diamonds can play in committed relationships apart from traditional marriage.

New York, NY—Lightbox, the lab-grown diamond brand of jewelry launched by De Beers last year, is expanding into brick and mortar retail: it’s going to be sold at Bloomingdales and at Reeds Jewelers. It will debut at Bloomingdales’ flagship locations in New York City and San Francisco, and will be installed in about 30 Reeds locations, predominantly in the Southeast. It also will be available on both retailers’ websites, as well as its own direct-to-consumer site.

The brand, which specializes in white, blue, and pink lab-grown diamond jewelry, is unique in the lab-grown category in that it prices everything in a transparent, linear fashion based on $800 per carat (not including setting).

Lightbox CEO Steven Coe said in a release that the Reeds/Bloomingdales partnerships will give consumers an opportunity to interact directly with the Lightbox product and give the company a better understanding of its customer base and the styles that resonate with shoppers.

“We have talked to many consumers since launch, and it’s clear that they are interested in fashionable, affordable lab-grown diamond jewelry, which is not currently available in store but is exactly what Lightbox offers,” said Coe in the release.

“With the rise in popularity of lab-grown diamonds, we felt the demand and need for a lab-grown diamond jewelry collection,” says Alisse Gregson, diamond fashion product manager. “This collection offers both essential styling as well as bold on-trend fine jewelry at accessible price points.”

Modern Brilliance has approximately 50 finished jewelry styles, including earrings, necklaces, rings and bracelets, all of which are available in 14k white, yellow and rose gold. It also offers bigger looks, such as line bracelets, for a better value. 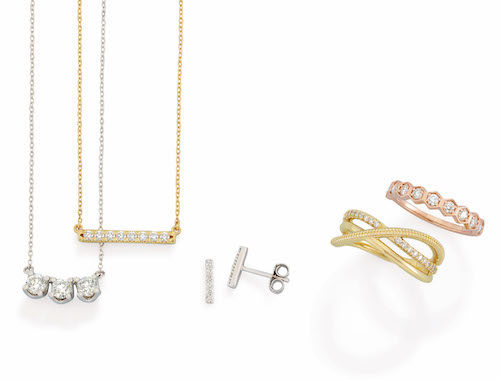 A selection of Modern Brilliance lab-grown jewelry from Stuller.

“This collection truly sets itself apart by offering trendy lab-grown fine jewelry to the industry,” says Alix Gonsoulin, vice president of fine jewelry, bridal, and findings. “By carrying lab-grown diamond jewelry, business owners can expand their customer base with not only a new story to tell, but the accessible price points for those who may otherwise not buy diamond jewelry at all.”

The newly formed Lab-Grown Diamond Council has enlisted sustainability consultant SCS Global Services, which has done work in the industry before, to create a set of criteria for sustainability in the lab-grown category, JCK reports. A recent survey from MVI Marketing showed that 85% of consumers believe third-party verification is important to guarantee any claims of sustainability, regardless of whether it’s mined or manmade.

Four diamond growers and two retailers (Helzberg and Swarovski) are part of the pilot program, which involves auditing their environmental, social, and governance performance against preset criteria, and examines not only how the diamonds are grown, but also how they’re cut to ensure that every step of the process addresses not only climate impact but also labor and safety standards.

Next article:
For Love Of Gems And Books: How A Gem Dealer And Jewelers Are Helping African Kids Learn To Read