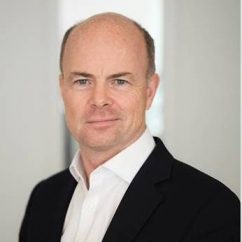 New York, NY—Diamonds are holding their own even in a pandemic. And the Natural Diamond Council is working to make sure they stay that way. (Image: NDC CEO David Kellie)

In the letter, Kellie announced that NDC has created a new consumer-facing generic diamond advertising campaign for the fourth quarter, set to debut September 14. The campaign, filmed in July, is still under wraps but features a Hollywood celebrity as the new face of natural diamonds.

The Natural Diamond Council, as you recall, used to be called the Diamond Producers Association. Funded by diamond mining companies, it was created in 2015 to bring back generic diamond marketing and support the category to consumers. Its first CEO, Jean-Marc Lieberherr—who left last year—came from the diamond industry, whereas Kellie, his successor, comes from the luxury fashion industry.

As a 34-year editor and analyst in the industry, I have a few observations. If you followed my articles even before The Centurion Newsletter, you know I’m a firm believer that fashion is far more important to the overall success of our industry than one might gather from our traditional marketing and training.

That’s not meant to discount the importance or significance of emotion in jewelry purchasing. Especially in these troubled times, emotion and meaning and lasting value is more important than ever! But underneath it all lies one indisputable fact: jewelry is something you wear.

You can’t use it to cut the lawn, fry an egg, or fix a car. You wear it. On your body, against your skin. That makes jewelry not only highly personal, but a part of the greater fashion industry—and the desire to own it is a fundamental fashion desire.

But this is a cottage industry, with few players well-funded enough to produce the kind of overarching, consistent advertising that’s needed to remind consumers how much they want diamonds and jewelry. Wanting a “Got Milk?”-style campaign for jewelry is one thing; paying for it is quite another. So once De Beers ceased its generic “A Diamond Is Forever” campaigns in 2008, a decade went by without giving a new generation of consumers compelling reason to think of diamonds as a cultural imperative. And since diamonds are the leading fine jewelry category, when they’re not being advertised, the entire category suffers. Holiday marketing from the chain jewelers and, later, Forevermark, helped a little, but it wasn’t the same as having a consistent big-spending campaign promoting “A Diamond Is Forever,” and by 2015 it was obvious that Millennials had developed other priorities.

Enter the DPA, which worked quickly to get diamonds back on track. By tapping the key leaders from the industry who were instrumental in successfully promoting diamonds before, the DPA was highly effective in two key foundational areas: a) doing the kind and volume of research necessary to formulate the right messaging for diamonds a decade later, and b) getting the industry on board.

That’s no mean feat. Our industry famously has a herd mentality, where most new ideas are greeted with a skeptical “who else is doing it?” and will be successful only if key leaders sign on. Getting everyone on the same page and committed to moving forward meant the message had to come from within. Lieberherr had the right pedigree, and as CEO his task was both to get trade buy-in and get consumers re-focused on diamonds.

By the time he left the DPA at the end of last year, the trade got it. With campaigns like “Real Is Rare” and “For Me, From Me,” DPA also had put up some good numbers in consumer awareness and desire for diamonds—and dealt with the simultaneous onslaught of lab-grown diamonds coming to market in commercially viable quantities.

That’s why it was the perfect time for DPA 2.0. As of June 1, DPA was rebranded as the Natural Diamond Council. As part of the evolution, the DPA’s former ‘Real Is Rare, Real Is A Diamond’ branding became ‘Only Natural Diamonds,’ and the website got a glamorous makeover including a change in its URL. It’s now www.naturaldiamonds.com. (The DPA’s old URL, diamondproducers.com, automatically redirects.)

The new site includes feature articles and content from consumer-facing jewelry writers such as Marion Fasel and Jill Newman, who earned chops at InStyle and The Robb Report, respectively. There's glam and fashion, but all the important wonky-industry arguments about rarity, sustainability, ethical sourcing, and natural vs. lab-grown environmental impacts are still there, just wearing a stylish new coat.

All the robust DPA trade support is still there too, with an array of resources for jewelers from diamond trend articles to a retailer locator to downloadable marketing materials to sales training and e-learning.

The timing is right for the simpler consumer brand identity.

“In the eight months since I took over in this role, the world and our industry has lived through unprecedented challenges. Never before has our generation faced such threats to our health, the economy and the way of life that we are used to,” said Kellie in his letter to the industry. “I have been incredibly impressed by how our industry has come together to support each other amid this crisis. More optimistically, it has also made me realize just how close we are to creating a new generation of consumers with a passion for diamond jewelry and the potential for our industry to grow significantly over the next five years.

Since launching the Natural Diamond Council on 1 June we’ve seen consumer engagement numbers on our new global websites (naturaldiamonds.com) considerably greater than our most optimistic projections. Daily traffic to our global websites in July peaked at a level 20 times higher than just a year ago. Engagements on our social media platforms are 30 times higher. We are now speaking to millions of potential consumers every day. The result is that more consumers are now spending more time shopping for diamond jewelry, particularly online, and the anecdotal evidence from brick-and-mortar retailers in many parts of the world is that, whilst footfall is lower, investments in diamond jewelry have grown.”

In his remarks, Kellie emphasized the importance of emotional selling. In its first three months under the new branding, NDC has learned “That if we speak to our consumer in the language of the “emotional dream” and we maximize our opportunities in the many digital environments, then there are undeniably significant opportunities for future growth for natural diamonds.”

But here’s where we see why it’s important to tap into fashion-industry expertise and dress the classic emotional appeal in high-style clothes: based on current results, Kellie forecasts the traffic and engagement with the Only Natural Diamonds site to be 40 to 50 times higher than previously.