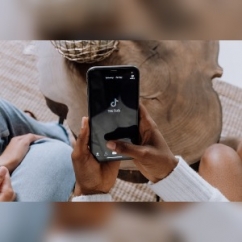 Houston, TX--When a 31-year-old psychiatric nurse practitioner from Houston started a TikTok account a couple of years ago to talk about jewelry and luxury goods, she had no idea that more than 21,000 people would be watching her shop for a mother's day gift at Van Cleef & Arpels boutique.

[Photo by cottonbro via Pexels]

Julie Dang's success on TikTok talking about jewelry, as highlighted in a report, shows how a content-hungry audience makes for massive engagement on the platform.

"We often have Gen Z clients WhatsApp-ing their personal shoppers with screenshots of jewelry they have seen styled on TikTok, wanting to jump on to the latest trend," Hollie Harding, a manager at Browns luxury retail, said in the report.

A 22-year-old student agrees, saying she searches for the jewelry on the app before committing to a purchase. "People actually make videos saying, 'This is good; this is bad; this is what happened when I wore it,' et cetera — and it's an actual person, and you can actually see them say it, so I trust it more," she explained in the report.

Even though people see this as an opportunity to gain popularity as a content creator, monetization prospects are bleak. Ms. Dang, for example, revealed in a report that she made a total of $420 from the TikTok Creator Fund, which is available to influencers with at least 10,000 followers on their accounts. That's an "insignificant income," she said in the report, adding that she's had videos that went viral, amassing hundreds of thousands of views.

The platform for content delivery seems to be laid out; only the riches it offers don't glow so bright.

Read more on influencers' experiences with talking jewelry on TikTok in the complete report.