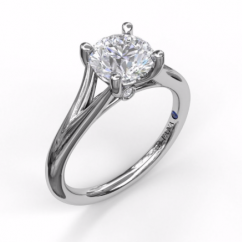 New York, NY—Love isn’t cancelled. Initially anecdotal, by year’s end the evidence was also empirical: the pandemic has forced many people to reassess their lives and focus on what matters most. As a result, couples are getting engaged at a record clip. Image: Solitaire engagement ring by Fana.

In December, the wedding-planning site The Knot released its annual Jewelry And Engagement Study for 2020. Its findings can help jewelers better merchandise and sell bridal jewelry in 2021.

The number-one attribute driving the sale of engagement rings is design, says the study. Style and setting mattered more to buyers than anything else.

The cost of an average engagement ring in 2020 was $5,500. While a little lower than recent years ($5,900 in 2019) given what havoc the pandemic could have wreaked on business, it’s not bad. It’s also a national average—in February 2020, shortly before the pandemic hit the United States hard, bridal brand Ritani told Business Insider that typical ring spends varied by state, with the highest being $10,109 (in Washington) to $3,005 in South Dakota.

As Ritani’s figures also showed, spending varies by region. The highest spend overall—$7,600—came from the mid-Atlantic region. And despite the top figures from Washington and second-highest, California, cited in the Ritani study, The Knot says couples in the west spent an average of $5,400, while the lowest spend was in the southeast.

Not surprisingly, 86% of couples chose a diamond engagement ring. Among the 14% who chose another stone, about one fourth (26%) chose moissanite, suggesting they like the look of a diamond at a lower cost. The study did not mention lab-grown diamonds.

About 58% of couples bought rings with a diamond center and side accents, and one-fourth chose a single solitaire. For total carat weight, the average ring was 1.50 carats, 1.30 of which was in the center stone.

The most important features of the ring to buyers were, in descending order, style and setting, center stone shape, type of stone. 48% of buyers had some degree of personalization (beyond sizing) of their ring, showing that the ability to customize is very important for retailers to offer.

Gold was the preferred metal for engagement ring settings, with more than three fourths (77%) of couples choosing it for their ring. The top three choices were white gold (48% of respondents choosing), yellow gold (16%) and rose gold (13%), which tied with platinum, also at 13%. The rest opted for other metals.

82% of ring buyers set a budget for the ring, but only 10% of couples set that budget number together. But once set, more than two-thirds (67%) said they stuck to the budget when shopping. 20% went over their predetermined limit. The overwhelming majority (91%) bought the ring on their own. 2% said their parents helped with cost, 3% said their partner paid or contributed to the cost, and 3% said they split the cost or paid out of a joint bank account.

68% of couples also purchased insurance with their rings. 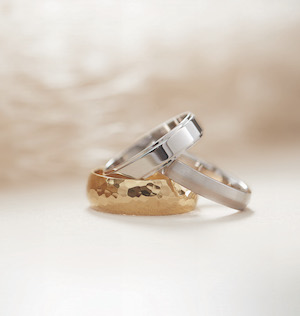 Men's wedding bands from Stuller, which is focusing on bridal in its Year Of The Wedding program to help retailers boost post-pandemic business.

Good news for jewelers: even in a pandemic engaged couples still like making this most important purchase in person. 63% of respondents bought their engagement rings in a store, and of those, more than half (51%) went to a local independent retailer, while 33% went to national or regional jewelry chain like Kay or Zales. Of those who purchased the ring from an online-only retailer, the top three choices were Brilliant Earth (21%), Blue Nile (19%) and James Allen (17%).

The proposal. Not surprisingly, couples had to pivot somewhat in their proposal plans due to the coronavirus pandemic. While it didn’t dissuade them from going ahead, it did impact things like how, where, and how to talk to parents or a jeweler without their significant other noticing. While nearly half of proposers in 2019 spent between one and six months to plan the special moment, in 2020 half began planning only a month before or less.

This year’s most popular proposal locations remained the same as previous years: scenic viewpoints (31%), at home (23%), at a place with significance to the couple (16%), and during outdoor activities like hiking (for the most part all thankfully falling within COVID restrictions.) Four in 10 couples proposed outdoors this year.

70% of couples surveyed plan to marry in 2021, and most of those in the second half of the year. 20% are looking at 2022 and 20% haven’t set a date, waiting to see how COVID restrictions play out. A significant number are planning microweddings, a very small celebration with fewer than 50 guests most close to the couple, and beauty in the details.

Previous article:
Stuller Launches ‘Year of the Wedding’ With New Ideas For Retailers

Next article:
Popular Fashion Website Says These Eight Engagement Ring Trends Will Be Hot In 2021