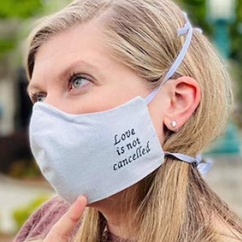 Merrick, NY—What a year. Is there any other way to describe it? After coming off a record holiday to close out 2019, 2020 began with great optimism. And at least for better jewelers, it seems to be ending on a high note in terms of sales, but so much has changed and so much more remains in flux.

Join The Centurion Newsletter as we review top jewelry industry news of 2020. Through the course of the next week, we’ll look at the good, the bad, the happy, the sad, and the truly bizarre happenings in the jewelry industry. We’ll examine retail, diamonds, gold, and more. We begin our journey with some of the top retail news.

Before 2020 became, well, 2020, the 2019 holiday season clocked in as better jewelers’ strongest ever. In 2019, 80% of luxury jewelers reported sales gains over 2018’s holiday sales and luxury jewelry outpaced general holiday spending by a margin of 2:1. But there was one very worrisome warning trend that emerged in The Centurion’s 2019 Holiday Sales Success Index: better jewelers got most of their 2019 holiday sales from older, Boomer-age customers—and not nearly enough from Millennials. We will continue to track that in this year’s Holiday Sales Success Index survey. Retailers only, be sure to take the survey by clicking here!

By March, it was obvious the coronavirus was going to have a major impact on the economy and retail. The stock market plummeted—to the point where trading had to be stopped three times to prevent a total crash—and luxury market executives progressed from confidence to caution to outright alarm.

But industry experts offered sound advice: stay the course, don’t pull your advertising, and focus on what you can control, including finances, internal operations, and staying in touch with customers.

Jewelers responded creatively. Some trimmed hours or went to appointment-only. Others closed their physical stores altogether and shifted to online or Zoom or curbside pickup and finding new technologies for sanitizing. Most better jewelers remained fairly confident about their business, though.

Last year, consumers largely bought jewelry in person. Jewelers were less likely than other retailers to have lost sales to e-commerce in 2019. But that was then and this is now. One of the biggest changes of 2020 is how many jewelers had to up their digital game in a hurry, such as offering online shopping parties benefiting charity, celebrating mothers, offering a billboard engagement proposal, and more. Image top of page: Spicer-Greene Jewelers in North Carolina hosted a successful online Mother's Day event. Co-owner Eva-Michelle Spicer reminds customers that vacations and dinner plans might be canceled but love isn't. 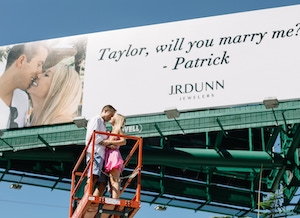 As stores began reopening in May after lockdowns in most states, the majority of jewelers polled by The Centurion reported the sky wasn’t falling after all—in fact, signs were already pointing to jewelers doing better than other retail categories, as consumers homed in on what’s meaningful and ultimately redirected vacation and entertainment dollars to diamonds and jewelry.

In June, retailers of all kinds held their breath as the death of African-American George Floyd under the knee of white police officer Derek Chauvin in Minneapolis sparked nationwide protests over racial inequity, and some of those protests devolved into violence. Some retail jewelry stores were impacted during the rioting, but thankfully most damage was limited to broken glass and a lot of cleanup, not life or merchandise losses, although one police officer did sadly lose his life protecting a jewelry store/pawnshop in St. Louis, MO. 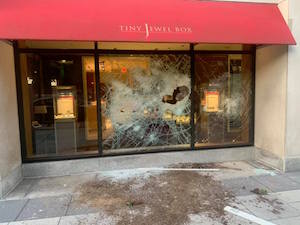 A window at Tiny Jewel Box in Washington, DC, was broken when formerly-peaceful protests turned violent.

By the end of June, it was obvious that better jewelers were going to come through the pandemic quite ok. Figures from The Edge Retail Academy showed jewelers experienced positive growth, even as other retail categories were clearly struggling. Many luxury and non-luxury brands and retailers were announcing layoffs and some long-venerated retail names like Lord & Taylor went belly-up for good. Meanwhile, luxury conglomerate LVMH hit pause on its acquisition of American luxury jewelry brand Tiffany, something it had eagerly pursued before the pandemic hit. The two did ultimately save the marriage and agree to lower the purchase price.

But multiple surveys were reinforcing what the industry already had started seeing: diamonds are going to matter a lot in the post-COVID normal, as will fine jewelry in general. For a variety of reasons (ranging from supply-chain shortages to realizing the impact of excessive consumption on the earth) consumers began re-evaluating their buying habits, shifting to fewer but better possessions imbued with meaning. They also shifted dollars from cancelled vacations and entertainment into diamonds, jewelry and luxury watches. The Edge Retail Academy reported jewelry sales rocketed 17% in late September and early October, and the National Retail Federation’s holiday forecast was back in line with recent years.

By the fourth quarter, the stock market had recovered its losses while economists, debating if the pandemic recession would a V, a U, a W, or the dreaded L, said “none of the above.” Instead, it was becoming obvious that the recession is largely a “K” shape, where affluent consumers quickly emerged better than ever but the non-affluent are struggling harder than ever. Black Friday sales, meanwhile, showed how much shopping has moved online in just six months and might never be the same in terms of a holiday benchmark.

As soon as the news broke in November that two pharmaceutical companies, Pfizer and Moderna had viable vaccines for COVID-19 (quickly joined by a third, Astra-Zeneca), things began looking more upbeat as nothing can return to any semblance of pre-pandemic normal without a vaccine. Equity markets immediately soared on the news, along with strong gains after the most rancorous election season in U.S. history finally ended with Joseph R. Biden’s decisive win over Donald Trump for the presidency.

Ultimately, as carzy and nerve-wracking as it was, jewelers may end up looking back at 2020 with an odd fondness. It both forced and enabled many to do things for their businesses they’d been wanting and meaning to do, especially digitally. It also showed that our industry is more adaptable than we all thought it was. And at press time, the Centurion Holiday Sales Success Index for the first three weeks of the 2020 holiday season was showing that 2020 is on track to possibly beat 2019 as the best sales year ever. Again, we ask all retailers to please click here to take the fourth and final survey for 2020's total season sales.